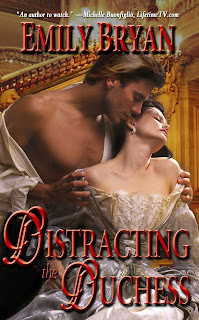 Hello, my friend,
Today is the official launch day for DISTRACTING THE DUCHESS! (Though if you're an Amazon or Barnes & Noble customer, you know it's been available there a couple days early!) I love these characters and I'm so excited to be able to offer Artemisia and Trev's love story to the world.
When I decided to write a Victorian set tale, I wanted to make sure my characters weren't the usual suspects--you know, the ingenue and the rake. That's story's been told, often and well. So I decided to make my heroine outrageous for her time (she's a widowed duchess who longs to be recognized as a serious artist, so she paints nudes!). And my hero is 'over-the-top' sexy (a nude model with nothing to hide, except the fact that he's Her Majesty's spy!). If I threw these two strong-minded individuals together, I hoped something interesting would come of it.
The reviews have been terrific. The watchword seems to be "fast-paced." One reviewer even told me reading it reminded her of riding the "Mr. Toad's Wild Ride" attraction at Disney World. She hastened to assure me that was a good thing. And RT BookReviews has tapped my hero, Trevelyn, for their K.I.S.S. Award (Knight in Shining Silver!)
But I know the only review that really counts is YOURS, dear reader. Please let me know what you think of DISTRACTING THE DUCHESS by publishing your review here once you've read it. Thanks!
Enjoy!
Em
http://www.emilybryan.com
Posted by EmilyBryan at 8:01 AM No comments:

FreshFiction Gives 2 Thumbs Up to DISTRACTING THE DUCHESS

Distracting The Duchess by Emily Bryan
"A nude model has nothing to hide, except the fact that he's a spy."
Reviewed by Lynne DillonPosted February 13, 2008

Artemesia, the Duchess of Southwicke, is an artist. Young and beautiful, but shunning society and all it represents, she's become the infamous target of the "Tattler," the gossip sheet of the day. Artemesia wants only to retain her freedom, run her own affairs and paint. Freed by the death of the elderly duke, Artemesia searches out her dreams and creates a man of business, Mr. Bedington, to handle her estate and expand her large fortune.

Trevelyn Deveridge is an undercover agent for Queen Victoria whose goal is to contact the said Mr. Bedington and retrieve a certain key that carries the names of other agents in India. He calls on Artemesia in the hope she can put him in touch with her man of affairs. Instead, he's mistaken for a model and asked to pose in the nude for the duchess' new painting. Trevelyn agrees and the duchess is awed by his powerful body.

Thus begins a dance of swords with both determined to call the shots. Then a third party begins to threaten and complicate their dance. Can Artemesia release control and remarry? Will Trevelyn admit defeat and sail off to India without her? Or will the enigmatic third party destroy them both?

I was a little put off by the idea of a hero being a nude model, but Emily Bryan pulls it off. The characters are strong enough to appeal to the most ruthless romantic, and the story is edgy enough to hold your interest. There's humor, but it doesn't control the story, for which I'm glad. I enjoyed reading it because it has just enough pathos. After all, an agent leads a dangerous life and can't afford to be distracted by a beautiful love interest. Would a man actually give it all up for love, or would a woman? The power is there, the hero is all-knowing and all- powerful to the dismay and distraction of the heroine, which is just what the title promises. This was a very good read.
Posted by EmilyBryan at 5:09 PM 2 comments:

I had a ball writing this story. Especially the first line.

"I'm going to have to shorten his willie."

If you just have to find out what follows this astounding pronouncement, please visit my website at www.emilybryan.com

Enjoy!
Posted by EmilyBryan at 9:29 PM No comments: