You CAN go home again.

I was in North Carolina over the weekend to attend a wedding and it was like a homecoming for me. I've lived in 9 different states, 4 time zones. The longest I've ever lived anywhere was the 11 years we spent in North Carolina. The church where the wedding was held was my home church and will always be the home church of my heart.

Yes, there were some empty pews. Some of my older friends are gone now. Some have changed churches or stopped attending altogether. Other friends have had beautiful children. But every face I saw lit with delight when they saw me. I've never been hugged so much in my life!

After many twists and turns (at one point the groom was stuck in South Carolina with no gas to get home and the bride was still frosting cupcakes an hour before the ceremony was supposed to start!) the wedding went off WITH a hitch. The groom arrived home too late to get the license ahead of time, so we had to do the paper work after the fact. But everything's tied up nice and legal now and my oldest daughter (the maid of honor) and I witnessed for them

I think everyone needs someplace where they are loved unreservedly. I just spent 5 days in such a place and count myself blessed.

If you live in North Carolina and want signed copies of my books, I did take a little time to visit some booksellers to sign stock. Please visit http://www.emilybryan.com/Autographed%20Books.htm to see where I popped in.

Wishing you all more hugs than you can hold.
Posted by EmilyBryan at 4:37 PM No comments:

Tomorrow, I'm heading for North Carolina to attend a wedding. I used to live there over a decade ago and still have friends who are dear to me. The young lady getting married was a member of the youth group I worked with while I was there. My oldest daughter is flying in to be a member of the wedding party, so I'll get to spend some time with her as well as connecting with old friends.

I'm excited . . . and I'm anxious at the same time. When you move away from a place, people freeze in your mind. They don't age. They don't die. They exist in that static bubble forever. My bubble is about to be busted. The children I knew have children of their own. Some of my friends are gone now. I know that. Actually being there without them will finally make it real. Undoubtedly, some of my friends have grown and changed in ways that will make it more difficult for us to connect and they could say the same of me.

I've lived lots of places. The 11 years I spent in NC was the longest I've been any one place. It's as close to that elusive idea of home as I know. Greek sage Heraclitus said "You can't step into the same river twice." Thomas Wolffe must have been thinking the same thing when he penned You Can't Go Home Again. It's not so much that home changes. It's that we change. So our perception of home is different. Yet, I hope to find that sense of place I hold dear still intact.

I'll also be hitting some bookstores along the way, so please check out my website for places to find signed copies of my work.
Posted by EmilyBryan at 7:39 AM 1 comment:

The Case for Silliness

Ok. I admit it. We live in a big, bad world. Terrorists are a real threat. The economy is wobbling like a top. We’re in the middle of a divisive, and increasingly nasty, election cycle. But, I would argue those truths support my conviction that every person needs a little silliness in their life. At least, once in a while.

I remember one day especially when silliness sort of took over. I was the proud companion of a 25 pound, long-haired cat (no one may be said to own a cat, you know). I loved Tommy Whiskers dearly, but his shedding drove me nuts. So instead of just vacuuming my house (again!) I went straight to the source. Yes, I put a brush on the nozzle and started vacuuming the cat. Needless to say, Mr. Whiskers didn’t think much of it, but I was making some real progress on his undercoat when the phone rang.

It was my dear husband. He was having a terrible day. One of his worker’s daughter had committed suicide over the weekend. Another had filed a sexual harassment complaint against another member of my DH’s team. The deadline for the project for which he was responsible got moved up . . . by several months. A string of unhappy people had paraded through his office that morning.

“I just had to call you,” he told me. “I needed to talk to somebody sane. What’re you doing?”

Dead silence. A little chuckle. A serious guffaw. Five minutes later, my husband was still ‘tears-running-down-his-cheeks’ laughing. He desperately needed a little silliness and I unwittingly provided it for him.

Especially when times are tough, we require silliness to balance things. Not everyone can be sure of having someone to vacuum their cats at the opportune moment, so what better place to find some silliness than in our fiction?

With that in mind, let me introduce you to my latest release, PLEASURING THE PIRATE. As the title implies, there are plenty of steamy love scenes in this story. But my pirate hero, Captain Gabriel Drake, also has 5 orphaned nieces who are constantly dreaming up new devilry, a crusty first mate who follows him back to his Cornish castle and a chatelaine who tries to ambush him on his way home. Of course, the main thrust of the story is the love that develops between Gabriel and Jacquelyn (the afore-mentioned chatelaine) but there’s no reason a romance can’t give you a chuckle or two along the way.

Pirates may have been fierce in real life, but now they are such fun! In fact, September 19th was the Official International Talk Like A Pirate Day! What? You’ve never heard of it? You are a lubber of the first water and in serious need of some piratical help. After all, Septemer 19th will roll around again next year and this time you'll want to be ready.

Check out my website at http://www.emilybryan.com . In my PIRATE COVE, you’ll find pirate pick-up lines, a pirate lexicon, and of course, an excerpt from PLEASURING THE PIRATE! Vote for your favorit Pirate Name in my contest. They were all submitted by readers and believe me, it's a tough choice. Just for voting, you are entered in a drawing to receive a choice from my backlist.

Please feel free to share your own silly story.

Oh! I want to assure them that no cats were harmed in the vacuuming debacle. Tommy Whiskers lived happily to a ripe old age, and when he died full of years and many cans of tuna, he was buried with ceremony and tears in the back yard.

But my husband still laughs every time he thinks of him.
Posted by EmilyBryan at 8:25 AM 1 comment:

I just posted the 10 finalists for my PIRATE NAME CONTEST on my website. Choosing from the nearly 200 entries was excruciating. I enlisted the help of family and friends, other writers and critique groups to whittle the list down to these choices. In the end, it's a purely subjective call and increased my respect for my editor no end. Bless her heart. She has to do this every day.

I thought you might be interested in what I was thinking when I settled on these entries, so . . .

Arabella Du Bois, The Bell - This one painted a picture for me. I could see this madame of the seas quite clearly, elegant and deadly. She's definitely a lady with a past . . . and maybe a grudge to settle in the future.

Hornswogglin' Holly, Hold onto yer Belongin's - This made me laugh! Can't you see her? The bag-lady of the Caribbean!

Stabber Stella, Neurotic Sea Wench - There's a place for a maniac in every vessel. She's a terror in a melee, but I bet her mates sleep lightly when she's in the next hammock.

Greenbeard, aka "Old Moldly" - Can we say clever? This entry took a pirate stereotype and gave it such a fun twist.

Captain Iva Gott Scurvey - Any entry that made Diet Coke shoot out my nose had to be included in the finalists. Again, this entry takes a real pirate ailment--scurvey--and made it funny.

Captain Billy Blackjack, Butcher of Barbados - Loved the alliteration. No wonder my book titles are PLEASURING THE PIRATE, DISTRACTING THE DUCHESS and coming March 2009 VEXING THE VISCOUNT!

Captain Sebastian Ashley Bennington - A gentleman-turned-pirate, no doubt. I'm seeing dark, hawkish good looks, a smoky voice, and a wicked hand with a blade. The Scarlet Pimpernel of the Seas.

Captain Greydon Quinn, the Wraith of St. Jude - Definitely a ghost pirate here. Almost like an avenging angel, with his halo slightly askew.

Now the final round of my contest has begun and I'm relieved to say visitors to my website will be the ones who choose the Grand Prize Winner. All voters will also be entered in their own drawing to win a choice from my backlist. Nip over to my website and make your choice today!

Did you know today is International Talk Like a Pirate Day? As you might imagine, I've been celebrating early since PLEASURING THE PIRATE was released last month.The PIRATE COVE on my website is chock full of pirate pick-up lines, pirate booty, and a totally fun pirate name contest in honor of TALK LIKE A PIRATE DAY!

Nip over smartly and join the party. Shiver me timbers, it's all in good fun!

Email ThisBlogThis!Share to TwitterShare to FacebookShare to Pinterest
Labels: "Talk like a pirate", BOOK GIVE AWAY, PIRATE CONTEST

The Naked Truth about the Bad Boys of the Caribbean 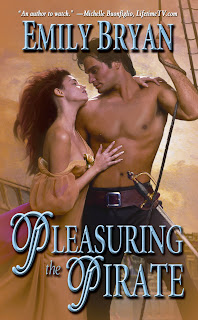 Email ThisBlogThis!Share to TwitterShare to FacebookShare to Pinterest
Labels: emily bryan, International Talk Like a Pirate Day, pirates of the caribbean, Pleasuring the Pirate

What? You've never heard of International Talk Like a Pirate Day? Undoubtedly, you are a 'lubber' of the first water. However, there's still time. TLAP isn't until September 19th. You can still bone up on the pirate lingo enough to pass as a swashbuckler. Visit my Pirate Cove for some pirate pick-up lines, pirate booty and a contest to win a boatload of books!

Shiver me timbers, it's all in good fun!
Posted by EmilyBryan at 2:30 PM No comments:

Hope you enjoyed my Pirate video. Visit www.emilybryan.com to read the first chapter of PLEASURING THE PIRATE. While you're there, sail around my Pirate's Cove. In preparation for International Talk like a Pirate Day, I've added several pages to my site--a pirate lexicon, pirate pickup lines, pirate booty, and my totally fun PIRATE NAME GAME. Someone is going to win a boatload of treasure, so be sure to enter today!