Go Get Your Boobs Squished! 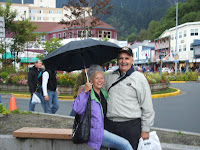 October is Breast Cancer Awareness month. This is an issue that's important to me. My mother is a cancer survivor. She was diagnosed in 1999, the year Walter Payton was dying for lack of a liver donor. I'll never forget the way my mother called out as they wheeled her to surgery, "If anything happens, give my liver to that football player!"

It's her nature to put the best face on things, so we all tried to keep a positive attitude along with her. We didn't allow ourselves to cry until the results came back after surgery, showing her lymph nodes were clean. Then we all bawled like babies, even my tough-guy Dad.
It appeared the cancer had been caught early, but just to make certain, the doctors prescribed a full regime of both chemo and radiation. My mother used hair loss as an excuse to buy 9 wigs of different styles and colors. You've got to understand. My mother is the coolest, most fashion-saavy of women. My daughters actually borrowed shoes from their grandma to wear to their proms. Cancer wouldn't be allowed to put a damper on my mom's sense of style.
But chemo is a long dark hallway and the light at the end is so dim at times, no one can see it. Sometimes, her white count sank so low, the treatment had to be postponed and extended. She needed to be reminded that there was life after the Big C.
So we planned a victory celebration for when she was done. What do you do when you've beaten something? Why, you go to Disney World! My mom's cancer was diagnosed in late January 1999. By December, she was done with the chemo and radiation and regaining her strength. So we headed for MickeyLand in time to enjoy the Millenium Celebration! Mom's been cancer-free since 2000.
The picture of my mom and dad at the top of this post is from the Alaskan cruise we took last year. Doesn't she look wonderful? She's a big proponent of regular screening. They'd planned to head for Arizona for the winter in '99, but she wanted to wait until after Christmas and her January mammogram before she and dad headed south. She'd never had a speck of cancer on her previous mammograms, so this was a particularly fast-growing little bug. If she'd blown off her routine mammogram, the cancer might have packed its bags and spread before it was caught. Early detection makes all the difference.
I've got an appointment with my doctor this afternoon and I'm scheduling my yearly mammogram. I know its a miserable experience--one I'm satisfied would be redesigned if the test required men to have tender parts of their anatomy subjected to flattening--but it's the best tool we have for early detection of a disease that kills too many women each year.
So, girlfriends, go get your boobs squished. It beats the alternative all to pieces.
Posted by EmilyBryan at 4:06 PM

Got my boobs squished last month, Emily! Thanks for the very important reminder.

And btw, don't forget to keep an eye on those moles, as well. My nephew just had a melanoma removed.

Holy Moly, you're right! I'm careful about the sun now, but in my younger years, I got a deep tan every summer. One year I fell asleep in the sun and suffered 2nd degree burns. Gotta watch for mole changes too.