The Scenic Route to Publication

"Not all who wander are lost." ~ Tolkien

Every writer's path to publication wanders over unique ground. Some make use of an agent. Some enter contests that result in a publishing contract. Some writers pitch their story to an editor at a writer's conference and are invited to submit the material. Today, fantasy author Helen Johannes shares the story of the road she meandered along till she saw her work in print. Take it away, Helen.

“Write what you love to read and write with the market in mind.” Good advice, right?

My school friends lured me beyond the BLACK STALLION novels into THE LORD OF THE RINGS and Ayn Rand’s ATLAS SHRUGGED. I was so caught up in their complex worlds and plots, I had to start my own quest tale, THE PRINCE OF VAL-FEYRIDGE. College intervened, but the story never left me. I dreamed of my hero and heroine and how I could possibly bring them together when I had set up so many obstacles to their love.

Years later, I discovered category romances at rummage sales, devoured them, and decided I could write romantic suspense. I liked my characters, but the stories didn’t engage me as deeply as the one I’d left behind. Meanwhile, I broke into publication with short stories and articles for writers’ magazines, plus I’d garnered contest wins, so now I had “publishing credits.” My query letters were getting requests for partials, but no contract. Because my children were starting to write stories too, I wrote them a short fantasy. The pleasure that gave me brought me back to my roots, and I dug out my handwritten manuscript. From my now “experienced” perspective, I deemed it worthy of completion.

Boy, was I naïve. I had three main characters, an adverbial overload, and so many subordinate characters I couldn’t keep track of them. I had a 15,000 word digression mid-story and no talisman to symbolize the quest. Plus, unlike Bilbo’s journey “there and back again” in THE HOBBIT, I had no “back again.”

What I did have was a love triangle, heroes I was in love with, plenty of conflict, and three lands that had once been one kingdom. That kingdom had been broken by a long ago act of theft—one brother stealing the throne from the rightful heir and the third brother refusing to choose sides. When I nailed down that concept and came up with a long-lost crown to symbolize the quest, that piece of history/legend began to shape everything in the story. It drives the Prince on his quest to reunite the kingdom, and that forces every character to decide where his or her loyalties—and heart—truly lie.

What I finished, however, didn’t fit publishers’ pigeonholes. I had blithely written the book of my heart, and like all choices of the heart, there were consequences. It took a few more years of queries, pitches, and partials before THE PRINCE OF VAL-FEYRIDGE found a home at The Wild Rose Press.

Back to that good advice: While you can write what you love to read, and you can try to write with the market in mind, sometimes you just have to write what your heart wants.

Prince Arn has a destiny--an ancient throne--but he’s not waiting for fate to deliver when he can act now, before his enemies organize against him. The healer Aerid longs for her barely remembered homeland. Marked out by her gift and her foreign looks, she insists she is no witch. The swordsman Naed hopes to honorably defend his uncle’s holding, but he harbors a secret fascination for the exotic healer. Prince Arn’s campaign against Aerid’s homeland throws them into a triangle of forbidden love, betrayal, and heartbreak. Only when they realize love is blood-kin to friendship, and neither is possible without risk, can they forge a new alliance and restore a kingdom.

THE PRINCE OF VAL-FEYRIDGE is available from:
The Wild Rose Press
Amazon
Barnes and Noble 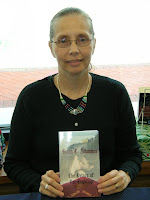 An Army brat with a yen for travel and a fascination for history, I majored in German and English and earned a Master’s degree in teaching English--specifically, all kinds of writing--and have taught creative writing for years. I love to travel, read all kinds of fiction, and hang out with romance writers.

Thanks for sharing with us today, Helen. Now it's your turn. If you're a writer, where are you on the path to publication? If you're not a writer, you still have goals you're striving for. What helps you along the way?

PS. I tried to fulfill #4 on my 9 Month Personal Bucket List over the weekend. To quote Robert Burns, "The best laid plans of mice and men oftimes gang agley." Find out what happened at www.miamarlowe.blogspot.com.
Posted by EmilyBryan at 6:09 AM

Email ThisBlogThis!Share to TwitterShare to FacebookShare to Pinterest
Labels: getting a manuscript published, getting The Call, helen johannes, path to publication, The Prince of Val-Feyridge

Well, I'll start with sharing a bit of my route to publication. As soon as I finished my first manuscript, I began submitting like mad, to editors, agents and as many contests as I could afford. At first, only the contests panned out. I started garnering some wins and finals. That pricked up an agent's ears and she started broadcasting my manuscripts like they were wheat seeds. After MAIDENSONG languished on an editor's desk for over a year, it was picked up by Leah Hultenschmidt at Dorchester.

Clearly writers have no need to pray for patience. We receive ample opportunity to develop it.
;-)

I started my route to publication at the instigation of my hubby. He believed writing was more productive than reading. lol

It took me a year to finish my first book, which was supposed to be a simple Silhouette romance. lol
Two hundred+ pages too long and way too many characters in it. I spent years revising that one story before I finally moved on.

Five finished books and a bunch of uncompleted stories later, I finally published my first book. It took a tad over 20 years to get to that point.

I submitted, pitched, entered contests and sent thank you's to no avail. I finally met some ladies who wanted to help writers get published and they mentored me. Through their guidance I learned so much and am still doing so.

It's a tough road to travel and better writers than me have quit.

Hello from a fellow TWRP author :) Great story of triumph. Your book sounds wonderful, and I'm off to see if its available for my Nook.

I love your call story and route to publication! Good for you for not giving up and making your dream come true! I have not read your story, but will certainly try it out now! Thanks for sharing!

Thanks for sharing. I think we all have our own roads and paths to follow. If we're smart we learn a few lessons on our journeys and the next journey out we avoid the pitfalls.

Thanks again for sharing.

I want to thank all of you who commented on my journey to publication. Thanks to your messages, I can see there are a lot of us who take the "scenic route," but the important point is that we don't give up.

It was good to read another's journey. Your story is inspiring,thanks for sharing.

I have just submitted for the first time. Three personal rejections with 'Dear Glynis and keep trying' as the message, keep me...well trying.

It is fun in a writer's world.