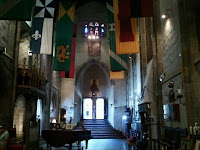 Our oldest daughter is visiting this week and we're trying to show her a good time. Unfortunately, we had a total flop with whale watching on Monday. You can read about that debacle at http://www.miamarlowe.blogspot.com So we thought we'd try a land excursion yesterday. We drove up to Gloucester to see Hammond Castle. (Again I did a piece on this fascinating place in August on the Mia blog ). But when we arrived at the castle, it was closed. Summer hours were over and it is only open Friday-Sunday now.

Still, the whole fam was together and we were determined not to let a little setback ruin our day. We strolled the sea wall in Gloucester for a while. Fresh air and a bracing harbor view always lifts my spirits. Then we figured a place as rich in maritime history as Gloucester must have a decent museum someplace. And sure enough we discovered the Marine Heritage Center/Aquarium.

It was totally underwhelming.

Plastic, canned exhibits you might see in any museum with very few real artifacts from the area. And the "aquarium" is a scummy joke. Their brochure indicates that MIT is a major contributor. If so, the university is not getting much bang for their buck. 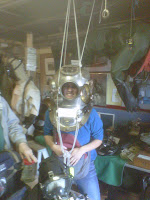 Then we wandered around to the back side of a the building and tucked into two cramped rooms, discovered an absolute treasure--Mr. Paul Harling. The first thing he did was get our daughter fitted into one of the brass diving helmets and acquaint us with some of the particulars about the early diving equipment and techniques. He brought to mind Clive Cussler's fictional naval historian, the bon vivant St. Julien Perlmutter. Whenever there's a need for information planting, Cussler pulls in this character to fill in the pertinent details.

But Paul Harling is a real fellow and, though he wouldn't have said so, I suspect a man of great personal courage. Well, he'd have to be if he began hard hat diving back in 1949 in homemade equipment. His personal collection of dive equipment and memorabilia is extensive and there's a story connected with each piece. We got to actually handle copper spikes forged by Paul Revere that Paul Harling salvaged from a wreck.

He told us about some of the early diving missteps, like when some genius decided an electrically heated wet suit would be the ticket to combat the bone-chilling cold of the deep. Yeah... right. Fortunately, the system was never used, but the helmet still had the plug built into it.

We could have spent hours in those cramped little rooms filled with the oddments of a life long passion with the sea. If ever I need any maritime information, I will contact Mr. Harling.

And like all good adventures, our day in Gloucester did NOT go as planned. Isn't it always better that way?

Have you ever had a day turned upside down for the better?
Posted by EmilyBryan at 6:06 AM

Long live Mr. Harling! And that electrical diving system sounds terrifying - I was really glad to hear it had never been used.

Yeah, that kind of bad idea makes you wonder what they'd been drinking.