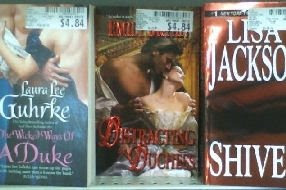 I'm thrilled to share that DISTRACTING THE DUCHESS has been nominated for an RT REVIEWERS CHOICE AWARD! My hero, Trevelyn Deveridge, was tapped for a BEST K.I.S.S. (Knight in Shining Silver) AWARD. The winner will be announced at the RT Convention in Orlando this April, but I'm tickled to pieces even to be nominated! If the RITAs are romance's Oscars, RT REVIEWERS CHOICE is the equivalent of an Emmy.

My 50day/50blog VEXING THE VISCOUNT Tour rolls on today with another chance to win a VEXING THE VISCOUNT. I'll be at www.jkcoi.blogspot.com talking about 4 methods for writing a novel. Hope to see you there!
Posted by EmilyBryan at 8:01 AM

Emily,
I hope you win. When it comes to quality of research, writing, and good taste in the bedroom, your books are streets ahead of the competition.