The Age of Deception

Fashion Makes Fools of us All. I research a number of areas for my stories and one of them is filling my characters' closets with the correct garments for the time period. Here's a taste of some of the things I found when I was writing PLEASURING THE PIRATE (1720) and VEXING THE VISCOUNT (1731)

Eighteenth century fashion encouraged unrealistic ideals. Lest you think only women fell prey to the urge to be more or less than they naturally were, let me assure you men indulged in deceptive fashion, too. Both sexes wore wigs and face paint. Men and women wore 'beauty spots' to cover small-pox scars or evidence of sexually transmitted disease. Well-developed calves were prized in men, so spindly-legged fellows wore wooden 'falsies' in their stockings. Women's figures were manipulated through tight binding in some instances and heavy padding in others.

A lady's costume started with a chemise, a thin slip-like garment. This was covered by a heavily-boned corset that flattened the breasts and shoved them up into the "rising moons" position. A gown's neckline might be cut so low that the nipples were displayed as part of the décolletage. Georgians did not fetishize breasts, so a well-bred lady was just as likely as a courtesan to show her nipples (and rouge them!) in public.

I probably wouldn't have believed this startling tidbit if I hadn't seen a Georgian miniature in a schloss (castle) the last time I visited Germany. Sure enough, the lady was depicted with two little pink dots peeping above her gown's low neckline.

Next, the panniers would be attached to a lady's hips. This contraption of wire and horse-hair might expand the width of the woman's hips so much, she'd be forced to turn sideways to fit through doorways. If the lady needed additional derrière enhancement, she'd wear a "bumroll" made of carved cork. It was said a woman wearing one could never drown.

Stockings of silk or cotton were gartered at the knee. This completed the undergarments of the Georgian woman. I know what you're thinking. What? No undies? That's right. No undies. With the yards of a woman's skirts held out with panniers not even touching her legs, I expect a lady would feel naked from the waist down most of the time. 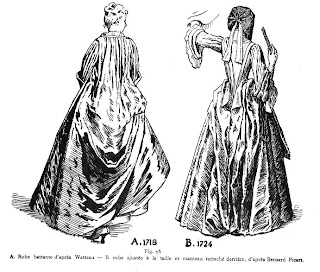 Lady's gowns were tightly fitted in the bodice, but might be loosely flowing in the back. This draped style was known as a sack dress.

The stomacher on the front of the gown was frequently ornamented with bows of descending size from the bosom to the waist. 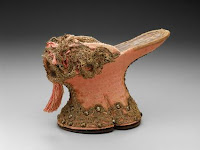 When has fashion not been about the shoes? The platform shoes shown here were actually quite conservative. Some women tottered along on 22 inch chopines until a maximum height of 11 inches was mandated by law. In a time when streets frequently doubled as sewers, platform shoes made a surprising amount of sense.

As the century turned, fashion turned away from manipulation of the human form toward a more naturalistic style in the Regency era. Since A CHRISTMAS BALL and STROKE OF GENIUS are set during that time, I'll share those fashions with you soon.

PS. Be sure to enter my CHRISTMAS IN AUGUST contest! The drawing will be held September 1st!
Posted by EmilyBryan at 4:25 PM

This was very informative. I gathered some of the information through the years of reading HR, but its neat to see pictures associated with the names. I can't get over the shoes though. I would brake an ankle wearing those things! I can see the need to stay 11 inches above the ground!

There are lots of details we romance writers leave out of our stories. Like for example, the reason women wore chemises as their base garment is because the gowns were so difficult to clean. Chemises were cheaper and more durable and would stand up to repeated washings. The outer garments were rarely cleaned.

Which explains why both sexes used an excess of perfume in this age.

Thank you for an interesting blog. I didn't know about the platform shoes. Can't imagine trying to walk around on 22 inch heels. I barely keep from killing myself in sneakers.
I'd seen prints of bodices with exposed nipples, but most were not of "ladies". Knew it was in style, but not for everyone.
I look forward to the next fashion lesson.

Patricia--The whole breast exposure issue for the Georgian era is only a little harder for me to understand than their fascination with women's ankles.

Polite gentlemen always preceeded a lady going up stairs and followed her when descending to eliminate the chance of a glimpse of an ankle. (Perhaps another reason for the platforms--they raised the very sexy ankles to the further safety of those voluminous skirts!)

Fascinating, thanks. I find it so hard to describe clothing. I look forward to reading your next fashion post.

Glynis, the reading public's willingness to have detailed descriptions of clothing or setting is shrinking daily. The best I can do in my stories is give a few unique details and hope my readers can fill in the rest.

Glad you enoyed a few of my research tidbits.

REally enjoyed your info. I had a great comment and lost it. Nother day. Keep up the good work
J

This was very informative. There are alot of things we forget about. I want to take the time and invite others to my website: www.melindaelmore.webs.com

Walk in peace and harmony,

Thanks, Anonymous. Don't you just hate it when you write something brilliant and the machine eats it? Will look forward to your really good comment another day.

Melinda, if you plan to undress your characters at some point in the story, as I do, you can't forget about these sorts of things. The historical readership is pretty sophisticated and I try to get the period details right for them.