The Unexpected Joy of Unintended Events 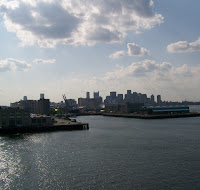 On Saturday, my DH and I had a series of unintended events. It all started with a trip to the car dealership to get the oil changed on our car. It had taken us a whole year to drive far enough to need a change (Yay for public transit) but my DH, like any alpha worth his salt, has a good sense of direction, so he wasn't using the GPS.

Unfortunately, I was telling him a very diverting story and he missed a turn on the route he had in his head. Now, you've got to realize that Boston is a very old, very unplanned city. You can't make 4 right turns and end up back where you started. It's really more like a giant Chutes and Ladders game. The roads pick you up and spit you out in someplace you never intended to go.

Ok, I hear you saying, why not just use your GPS? Well, we would have if we'd had an address. My DH knew where he was going, remember, so he didn't bother with checking on the address again. Like any good wife, I suggested we stop and ask to check for the address in a phone book, but like any good man, he refused. He knew what street the dealership was on. All he had to do was find it. So he soldiered on, using the Columbus method of navigation. While frustration was growing on the left side of the car, I decided to enjoy the unexpected tour. Boston really is a fascinating city with a broad spectrum of different architectural styles. (Unexpected joy #1)

But don't ask my DH. He wasn't looking at the pretty buildings.

Now a trip to the car dealership is way down there with a trip to the dentist in my book. Either way you're at the mercy of someone else. Imagine my surprise when I discovered our dealership had added a "quiet room" for their adult customers, complete with massage chairs. And not just any massage chairs. These were massage chairs on steroids. These chairs even massaged our legs! I developed a meaningful relationship with one and as we left the dealership a short time later, I drilled my DH on what else we might have done to the car so I can visit my chair again soon! (Unexpected joy #2)

Then we decided to do something that would be purposefully fun. We took the T down to Long Wharf and hopped a harbor ferry out to Spectacle Island. We chose this island because it sounds "spectacular," doesn't it?

Wrong. Spectacle Island got its name because its two little hills (called drumlins) rise from the harbor like a pair of half-submerged spectacles. Ok. But it's an island and that's my definition of someplace romantic.

Wrong. Spectacle Island was a garbage dump for most of its long and disgusting history. Barges of dead horses were ferried out to the rendering plant where they were turned into glue and hides. 13 unfortunate families made their homes on the island at one time. I can only thank God that the human nose shuts down after a certain amount of stimulation. Most recently, the island received tons of fill dirt from The Big Dig. (Thank you, BTW. Your tax dollars helped fund this gargantuan project that buried the previously elevated highway that ran through downtown Boston.) So the island has been reclaimed, reshaped and replanted. A win for the environment, right?

Wrong. Even though there are 5 miles of hiking trails, there is no natural shade on this island. We had sunscreen, water, sunglasses, and I was wearing my visor, but the park service would make a killing if they sold umbrellas at their visitor's center. 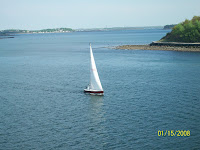 But while Spectacle Island made me feel like I needed a shower, the views from its questionable shores were "spectacular." And we spent a lovely hour sitting on adirondack chairs in front of the visitors' center, watching the sailing and cruising traffic go by.

And I had my third unexpected joy. Just spending time holding DH's hand.

What unexpected joys have surprised you lately?
Posted by EmilyBryan at 8:32 PM

I'm glad you turned those events into something good. Excellent post. Thanks for the smiles this morning!

Barring the desperately unfortunate or wildly exciting event, I expect we're all as happy or as unhappy as we decide to be.

Thanks for stopping by, Ella!

We spent the day in Boston a few years ago. It was a gloomy day outside, but I was totally mesmerized by everything. My son got to feed a squirrel in the park. I got some really eerie pictures of a statue (guy on a horse, don't laugh I can't remember which historic figure he was). I was amazed at some of the other statues in the park. And found the most beautiful spot. I told my husband that I would move there in a heart beat!! I was born and raised in the South so the thought of ever movie up north flabbergasted him. I loved the very narrow roads. I love that the city really had no plan to it. We of course had to stop in and eat Cheers and do the touristy thing and get a family picture under the sign. In a sense it made me homesick! It really reminded me of Savannah, which is the other place I would move in a heart beat.

Unexpected pleasures... last night my 6 year old son climbed up in my lap and let me hold him like I used to do when he was a baby. His little cheek rested just below my collar bone, his arms were wrapped around my waist... the difference--- his legs were dangling off the couch, he is 60lbs heavier, and he wouldn't let me rock. He says he is too old to cuddle with mommy on the couch :(

Heather--That was probably General George Washington on that horse. The Continental army was encamped on Boston Common for some time during the Revolutionary period. And at the far end of the Public Garden (a Victorian era development--during Revolutionary times, the Charles River covered that entire park area. Lots of the most exlusive parts of Boston are built on land that was reclaimed from the Charles and built up by hauling in trainloads of earth from distant mountains), there is a large statue to commemorate his service to our country before he became our first president.

Boston has to be one of the worst towns in the US to drive in. That whole area of New England has its problems. It is old. The roads were laid out long ago for wagons and horses, not cars, and were based on game trails and indian paths. To make it even more frustrating, they have some of the worst road signage in the country - actually it is the lack of signs that is the problem. We were up this month to visit relatives in Derry, NH and Methuen, MA. Don't get me wrong, I love the area, just don't be in a hurry. Expect to get a bonus tour at some point when you make a wrong turn. We've found some lovely places that way. We've been know to take a turn just to find out where it leads. The road less traveled holds its own special joys.

Patricia--Amen to the bad signage! Boston evidently believes if you don't know where you are, you aren't supposed to be there!

But even natives get lost here, so we don't feel too bad if we become temporarily bewildered. "Bonus tour"--I like that. I expect it will become part of my lexicon.

sounds like a lovely day, Emily! :)
If I ever go back to Boston (and I definitely plan to), I want to visit at least one of the harbour islands. They looked so pretty and green from the sunset harbour cruise ship I was on last time - in spite of the continuous rain and slate grey sky we had!

There is another island I'd like to see, too, Nynke. It's called Georges Island and it has the ruins of a fort on it. So that's the next trip.

Ooh, ruins of a fort! That sounds very enticing indeed. Will you let us know when you go there?

Oh, Nynke, you know I tell you everything!