Sleeping with a Harvard Man 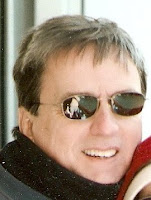 I've been married to the same surprising man for longer than either of us was single. You'd think in that length of time, I'd know everything there is to know about him (even though he is Norwegian and they invented the strong silent type!) But he continues to throw me curves.

When we lived in NC, he took up astronomy and spent hours with his telescope peering into the night sky. It turned out to be a fun family hobby and he introduced the kids and me to the lunar landscape and the rings of Saturn. Who knew a computer guy could tune into the music of the spheres?

Then when we moved to Wyoming, he wanted to buy some horses. I had no idea he could ride. This pic is of my DH and Star, my little mare. She was so sweet, butter wouldn't melt in her mouth, but Cody, the gelding my DH rode was so full of himself, it was hard to believe he'd been snipped. But every time Cody got cantankerous, my DH stared him down. My DH was definitely the only stallion in the paddock and try as Cody might to have a rodeo, he was never able to throw my DH. I'd been sleeping with a centaur all those years and never knew it!

When we lived in Utah, I gave him a flying lesson for Father's Day. It was just a lark, but before his birthday rolled around, he'd bought a Cessna 182 straight-tail and was pursuing a private pilot's license in earnest. We flew all over the western United States in that little bird, something as a "white-knuckle flyer," I never thought I'd do in a million years.

And now, my DH is surprising me again. He's going to Harvard.

Now you've got to understand that we both come from the bluest of blue-collar backgrounds. Nothing wrong with that. I'm just saying the thought of attending an Ivy League university when we were growing up in the Midwest was about as remote a possiblity as walking on the moon.

But tonight after work, he starts his first class. Not bad for an Iowa farm boy.

I'm so proud of him, I could turn cartwheels!

And given his track record for surprising me, I'm wondering what he'll do to top this . . .

So now it's your turn. Has your Significant Other ever done something that surprised the socks off you?
Posted by EmilyBryan at 8:41 AM

What a fun blog! The most surprized I am by my dh is when he works really long hours, but still has energy when he gets home to play with my dd... (tractor rides, playdough, taking her to a park...) It's great & I love it. ~Laura T

Thanks, Laura! Isn't it wonderful to watch a man plays with kids? They both just light up!

Emily that is a wonderful story about your husband. You must be sooo proud of him. It is a reminder to never give up on your dreams!

Emily! What a touching post in honor of your DH and his accomplishments! He's going to love Harvard! My DH is a simple guy who treats me like a queen, drives me everywhere and cooks for the family! Glad he's stuck with me!

your DH is one cool dude! I wonder, is he taking classes that will take him further in his profession, or going off in another new direction? Either way, hope he has lots of fun and new insightS!

Thanks, Mari. I am so proud of him. He was a little nervous today because he hasn't taken a class in a long time. But I told him, he'd do great.

I will however have to give him time to study in the evenings now!

Etirv--I think a guy who cooks is just about the sexiest thing on the planet! Yay for your DH cooking for your fam!

My DH is the grill king. Man cook with fire and all that!

Nynke--He's taking a course in management so yes, it will help him in his career. He already manages a team of professionals, but he's always looking for ways to coach them to greater excellence and more productivity.

Whether he'll decide to go for an advanced degree remains to be seen, but he's psyched about this class.

Love reading your posts about your family and this one about your hubby is just gorgeous, your love & pride in his achievements shines through in your writing. An adventure man and an academic woohoo!!

My hubby is the BBQ king, he does a mean roast!!! He can also cook in the kitchen, very versatile LOL

Wow! Good for him and all he has accomplished. It is good to have surprises like that.
The biggest surprise my husband ever gave me was showing up in the Philippines at my Peace Corps assignment to propose marriage. We had never dated and had only seen each other about 4 times in 7 years. Most surprising of all, we've been married 37+ years and are still going strong.

Teddy-- Aussie BBQs are the stuff of legend. Lucky your man knows his way around a grill! And three cheers for versatility!

Pat--I continue to be amazed at the adventure in YOUR life! The Philippines with the Peace Corps! You rock! And so evidently does your DH!

Thanks, Dani! It took a bit for me to figure out how to make my blog look like my website www.emilybryan.com. My knowledge of html is limited to cutting and pasting the code of others and hoping something magical happens. My faithful readers continue to bless me with blog awards to dress up the sidebar with!

What a great post about your husband! Congratulations to him and Harvard!

My DH surprises me daily! The strength determination and pure defiance that he displayed while going through Chemo was amazing. I knew my husband was strong, defiant, and determined but the lengths he pushed himself during that time just amazes me. My husband refused not to go to work. He would take his laptop with him to his treatments and work from his chair. Didn't miss a day of work. And all the while he looked so darn good. You would never have thought he was battling cancer. He made sure to play with our son every day after work. He became a volunteer wrestling coach (an Iowa boy can't say no to wrestling)! The love that he shows us every day is truly tremendous!

Heather--You never know how strong someone really is till you have to watch them go through a period of weakness. Hurrah for your DH's attitude in battling cancer! Hope he continues to do well.

So you've got an Iowa boy, too! Aren't they the best!