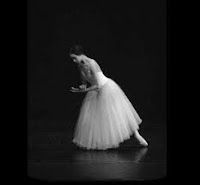 First of all, a big thank you to Emily Bryan for sharing her blog with me while she is away. My hugs and best wishes go with her. As for readers of her blog, I’ve got two books, Shadow Bound and Shadow Fall, ready to give away to a blog commenter.


I love ghost stories. And I hate them. They scare me, and worse, my imagination has a tendency to play with them long into the night, hours from the original telling, until the structure and the content of the story has shifted just enough to dig at my deepest fears. Those nights, I sleep with the light on.

My head has been working on one particular ghost story for years: The ballet, Giselle. A long time ago, way back when, I used to be pretty serious about ballet. I wasn’t crazy about modern choreography; I wanted story ballets. Actually, I just wanted the stories. But of all the ballets, Giselle entranced me the most.

Giselle is a tragic love story in the first act; an eerie ghost story in the second. Once upon a time, I got to be one of the wilis, the bitter spirits of broken hearted women who populate the woods in the ghostly second act of the ballet. They trap men wandering the woods at night and condemn them to dance to their deaths. It’s a nightmare in black and white; the deep, still forest and the insubstantial bright spirits waiting to torture passersby. Myrtha, the wili queen, will point at the next victim, you, then circle her hands over her head, will dance, then cross her wrists before her, until you are dead. You will dance until you are dead. Creepy, no? The victims beg the wilis for release, but one by one we would literally turn a cold, ghost-white shoulder.

The setting could easily be my Twilight, a between place of magic in my Shadow series. Twilight is about beauty, inspiration, and nightmare. In Shadow Fall, my heroine is Annabella, a ballerina making her debut in the lead role of Giselle. The story of the ballet plays a huge role in Shadow Fall, a dark fantasy, mixed with romance.

What are your favorite ghost stories?
Back cover blurb for Shadow Fall:

Sacrifice
Custo Santovari accepted pain, blood, even death, to save his best friend. But a man with all his sins just isn't cut out to be an angel.

MysteryOne moment he's fleeing Heaven; the next, he's waking up stark naked in Manhattan. In the middle of a war. Called there by a woman who's desperately afraid of the dark.

ShadowIt gathers around Annabella as she performs, filled with fantastic images of another world, bringing both a golden hero and a nightmare lover.

WolfHe pursues her relentlessly, twisting her desires even as she gives herself to the man she loves. Because each of us has a wild side, and Annabella is about to unleash the beast.

A bit about Erin: 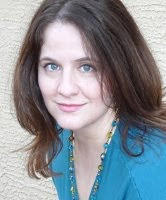 Emily here again. Thank you, Erin for being such a great guest host today.

Be sure to leave a comment or question for Erin for your chance to win one of her terrific books!

Posted by EmilyBryan at 5:00 AM

I once read a Dean Koontz book that freaked me out so much I hid it in a drawer. I found it awhile later, and decided to read it. Turns out, I like scary stories.

I am such a scaredy-cat that I don't normally read ghost stories, but your books sound intriguing. The interweaving of the ballet Giselle within your story appeals to me. Like you, I prefer the story ballets.

Paranormal ghost romances that I remember the most are Kresley Cole's Dark Needs at Night's Edge and Anne Mallory's For the Earl's Pleasure. Of course, who can forget the Charles Dickens classic A Christmas Carol?

So nice of you to stand in for Emily today! I have not read many ghost stories.OK, well I have not read any, oops! I am expanding my horizons though! LOL! Hope you have a great day!

Favorite ghost story....hmm....I really liked the comedy 'Ghost Town' LOL! Not exactly scary, but hey, there are still ghosts in it :-)

Thanks to everyone for stopping by!

Jennifer--I loved GHOST! Patrick Swayze was fantastic in that movie. I hope you enjoy Shadow Fall, too. :)

Mary--Yay! Someone who shares a love of the story ballets! I hope you get a chance to check out Shadow Fall. Giselle plays a big role in the story.

mrsshukra--Kresley Cole is a favorite of mine too. I'll have to pick up Anne Mallory's book for sure. And I read A Christmas Carol every year! Thanks so much for commenting.

Jane--There's nothing like a good ghost story. Try one!! And you have a great day, too. :)

You must have commented when I was writing my last post! Thanks so much for stopping by. I liked Ghost Town, too. And yes, it counts!!
Erin

Ummm...great question. My favorite ghost story would probably be the movie ALWAYS with Richard Dreyfuss. He was a airplane pilot who fought forest fires and died. Not very scary, but very romantic. Kinda sounds like you book. Will have to give it a try. :)

My favorite ghost story is Sleepy Hollow, and Tim Burton and Johnny Depp made it all the more fun to watch!

What is REALLY scary is that movie is more than 10 years old! My, my how time flies.

I hope everything went well Emily!

Hi Erin! Great post I'm such a huge fan of Ghost stories. (Plus I watch all the Ghost hunter shows and love the Haunted History show on the travel channel) I will have to try your books they sound very interesting and as I love paranormals right up my alley!

I honestly can't choose my favorite ghost story because I have so many but among my most faves are Charles Dickens A Christmas Carol love the message in that one. I loved Ghost as well and Sleepy Hollow. I really am a fan of some of the real ghost stories too not just in literature Scotland is a big favorite as there are hundreds of haunted places reported there. :)

Have seen your two books reviewed. Most interesting. I don't read much fantasy or others in the paranormal field. These stories sound like the will tap into our emotions at a core level
GHOST is also my favorite movie/stroy..

Jennifer--The only problem with Ghost (which was really scary the first time I saw it) is that there's no way to have a traditional HEA. Patrick Swayze was really something, wasn't he?

Mary--I'm a bit of a scaredy-cat too. I stopped reading Jaws, more because of the gross-out factor than the scare. Suspense really bothers me sometimes. Makes me look over my shoulder for days afterward.

MrsShukra--If it's done right, A Christmas Carol is a scary tale, as well as a scathing social commentary.

"It is a time, of all others, when Want is keenly felt and Abundance rejoices."

Jane L--Good to have your horizons expanded, isn't it?

Chelsea--I haven't see that one, but I can certainly see the comedic potential in a ghost story. My critique partner, Ashlyn Chase, has a ghost in her new novel STRANGE NEIGHBORS. He's a smart-aleck secondary character, but I really enjoy him and the trials of his after-life.

Erin--I really appreciate the way you stepped in for me this week. Thanks so much!

KC--Interesting profession, fire pilots. I'm so glad they're willing to do it. We were evacuated out of our mountain neighborhood when we lived in Park City Utah once and if they pilots hadn't been willing to fly to drop the retardants, the guys working on the ground probably wouldn't have gotten a handle on the blaze and we'd have lost all our stuff. (I'd never say we'd lost everything so long as the fam and pets all got out.)

Nora--If anyone could make Icabod Crane hot, it's Johnny Depp!

JennJ--I was doing some Scottish research the other day and was surprised at how many truly ghastly folk tales and ghost stories there are circulating around the glens.

LibraryPat--I think fantasy is uniquely situated to tap into core issues. The trick, which Erin does beautifully, is not letting them become morality tales or allegories. Her work is lovely and I hope you'll check it out.

Erin, I still have some dance-related books from back in my ballet days and I remember Giselle especially (second favorite after Swan Lake). I used to always toy with the idea of trying to turn them into books!
Margay