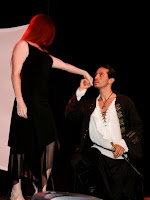 Each year Dorchester Publishing sponsors the Mr. Romance Contest. All week long, the contestants mix with the convention attendees and try to garner as much support as they can. Then on Saturday, we have the the "Pose Down." For part of the show, the cover models dress as heroes from Leisure Book and LoveSpell novels. This is Eric Trugila, the model who portrayed my Lucian from VEXING THE VISCOUNT.

Eric is studying to be an EMT. When I told him he wanted to be a real life hero, he said he only hoped he'd get to emergencies soon enough to be a hero. 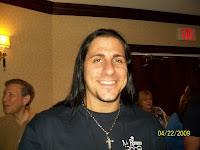 This is Franco D'Angelo on the right. He's a professional wrestler when he's not vying for the Mr. Romance title.

The pic on the left is Constantine. He's from Greece, with a devastatingly attractive accent. He is interested in body building and philosophy. Don't you just hate it when the guy has prettier hair than you do?

Meet Stephan. He has a really big . . . sword, doesn't he? He is portraying Jade Lee's Dragon hero.

Jimmy is an All-American boy who spends his time panning for gold in Columbia (I am not making this up!). 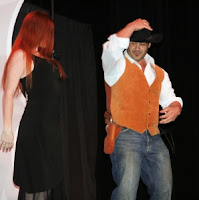 "Well, howdy ma'am!" This cowboy is Charles Paz. He won the competition and let me tell you why. Of course, he's handsome and he has trouble finding jackets that will fit over his muscles because they're so big. But what Charles really has going for him is his personality. He's funny and thoughtful and very sweet.

During the Pose Down, there's a segment where each of the contestants gets a chance to romance one of the female models. Most of the guys went for the dipping kiss or swooping the girl into their arms to carry her off, but Charles took off his jacket, draped it around her shoulders and kissed her on the hand. It was the essence of romance, an unspoken desire to protect as well as possess. It reminded me of something my DH would do. When Charles won, I was on my feet cheering! 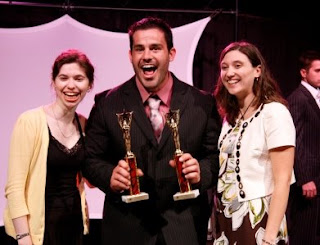 The lucky girls with Charles are Erin Galloway, Dorchester's marketing guru, and Leah Hultenschmidt, my own fabulous editor. Look for Charles on a Leisure Books cover sometime in the future!

Special "Thank you" to my friend Christie Craig. In addition to being a hysterically funny romance author, she's a kick-butt photographer. These pics are all hers. Look for her next title GOTCHA in June but you can pre-order it today to make sure you don't miss out by clicking right here! She sent me her DIVORCED, DESPERATE AND DATING to read while I was recovering from cancer surgery and I nearly split my incision laughing!
Posted by EmilyBryan at 2:30 AM

Hi Emily,
Wow, great pictures to look upon. :) These guys are all amazing. But I think I like Charles Paz the est. :)
Sorry I missed you at In My Humble Opinion today, got the email too late. I can't wait for "A Christmas Ball" to come out, but I now the wait will be worth it . I love all your books and Heroes and Heroines.
Carol L.

Oh, thank you for those kind words, Carol! I appreciate my readers so much!

I can't wait for A CHRISTMAS BALL either. My editor loved my story in it--MY LADY BELOW STAIRS. She especially liked the last 30 pages--the ones I wrote while recovering from surgery. Said she laughed more than she had in a very long time. (And no, I wasn't on pain meds at the time! LOL!)

Thanks for the lovely pics, Emily. I didn't get to go to RT and I really wanted to. At least through these photos I was ALMOST there! Charles sounds like a real gentleman. And he certainly LOOKS the part!

Can't wait to read A Christmas Ball. I know it will be fabulous!

Thanks Louisa! It was such fun. Start saving your pennies for next year. RT will be in Columbus, OH.

Fabulous pictures! Best I've seen. Great tidbits/facts about the contestants! I only hate it if a man has prettier hair than me if he remarks on how bad mine is... lol

I cut my hair to shoulder length back when I was expecting I'd have to go through chemo. I figured going in stages might make things easier. Then I didn't have to have it, so I'm growing my "mane" out again.

But I've had long hair most of my life. It felt weird that 3 of the guys had longer hair than I did!

Your comment about Stephan's sword just made me laugh out loud! Thanks! There must have been a lot of big...swords...in that contest. By the way, I must tell you that I attempted to read Pleasuring the Pirate on the airplance back from Sanibel, but my 11 year old son was sitting next to me and I was afraid he was peeking at the book! It's so irritating when the kids learn how to read!

You never know, Penny. I've heard steroids can have a deleterious effect on . . . swords.

Better save my PIRATE for an afternoon when the kids are playing outside!