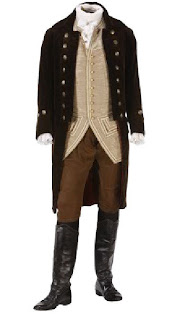 Every year my publisher Dorchester sponsors the Mr. Romance Contest at the Romantic Times Convention. That means all week long, aspiring cover models will be mixing with the attendees trying to garner the votes required to be named Mr. Romance (and be featured on a future Dorchester cover!) One of the favorite parts of the competition is the Pose Down. Each competitor appears dressed as a Leisure Book/LoveSpell Hero. Last year, Ryan Gardner appeared as Gabriel Drake, my PIRATE hero. This year, one lucky lad will get to strut his stuff as Lucian Beaumont, Viscount Rutland, my hero from VEXING THE VISCOUNT.

When Dorchester's marketing guru, Erin Galloway asked me to send her an idea about how Lucian might dress, I forwarded this example. Those of you who've seen THE DUCHESS movie will recognize it as one of Ralph Fiennes' (Thanks, Nynke!) outfits. Then Erin asked me to write a little blurb to describe Lucian so the Mr. Romance Contestant will have an idea how to portray him during the posedown. Here's what I sent her:

Lucian Beaumont, Viscount Rutland is every inch a gentleman. But don't let the silks and lace fool you. Beneath the civilized facade, he's darkly dangerous, a wicked swordsman who's not afraid to get his hands dirty. And he's even more dangerous without that silk shirt since the manual labor of excavating a Roman ruin has honed his body to rival a Roman god's. Best of all, Lucian is a rarity for his age and station. He's a virgin. He's been too busy rebuilding his family's fortune to court a bride, too poor to keep a mistress and too fair-minded to ruin a willing serving girl. But Lucian's a quick study and he's looking for the right woman to instruct him in love--a knowledgable woman who will complete his education and teach him all he needs to know about pleasing her!

Anyone want to apply for the position?
Posted by EmilyBryan at 2:30 AM

Now I really wish I was making the trek to Orlando to see this.... :-(

That's entirely too much clothing for a hunky cover model IMO. LOL

There is nothing in the world like a handsome man in period costume! Swoon! (See my myspace if you don't believe me - Hehe!)

I have to admit, this is my favorite part of RT - rubbing hands together manically*

Start saving for 2010 girls - RT is the romance industry's event of the year!

Michelle--The 2010 convention will be in Columbus Ohio, one hard day's drive from New England. Maybe that will work better for you.

Ashlyn, my dear! I love how your mind works, but we must leave "scope for the imagination," as Anne of Green Gables used to say! Repeat after me, "Repressed sex is the best sex!"

Genella--I so agree. Don't you wish more men wore knee boots and carried riding crops? (OK, Ash, I can hear what you're thinking, you naughty girl!)Can't wait to see you in FL!

Very nice, Emily. Looking forward to seeing one of the models in that outfit. Very classy

Aah, so that's what waistcoats looked like in the 1760s/1770s! Looking at stills from The Duchess really helps to get an image of fichus, panniers, and hot men wearing wigs, too... That was a good idea, Emily, thanks!

But did you know the man's name is actually Ralph Fiennes? I have no idea how they got from that to the way it's actually pronounced, but there it is :).

The RT sounds great, and I especially envy everyone who gets to see the Lucian-styled model IRL! :)

PS I've finally cottoned on to the fact that I, too, can remove my own comment and post it again without typos. Yay!

Thanks, Nynke! That's what I get for trying to do something from memory instead of looking him up! I'll go in and fix my post too! ;)

I loved Ralph in THE ENGLISH PATIENT. Such passion and hopeless obsession. It was wonderful. Please tell me that was him!

Love a man in breeches LOL

There is an award awaiting you at my place :-)

Bless your heart, Teddy! And I saw that you teased VEXING THE VISCOUNT on your blog! Please everyone, pop over to Teddy's and add a comment! Thanks so much for giving my book some "pimpage!"

Yes, that was definitely him in The English Patient. Sigh... And strange to think how I hated Colin Firth's character in that movie, in hindsight... I must've seen it before Pride & Prejudice. :)

You will be posting a picture of the model dressed up as Lucien right? Right?!