In STROKE OF GENIUS, my hero Crispin Hawke paves the way for Grace Makepeace to make her debut in London society at Almack's--the place to see and be seen in Regency London.

Since the custom of being presented at court had fallen by the wayside, most young girls made their "come-out" at Almack's. For the price of ten guineaus, a voucher might be purchased that would admit the bearer to the Wednesday night dances for the entire Season.

But not just anyone could purchase a voucher. The attendees had to pass the intense scrutiny of the patronesses before being approved. Even if one attended as the guest of a qualified member, as Grace does, the patronesses still had to officially sanction the visit. Possessing a voucher meant the difference between society and Society. If one had been rejected by Almack's, the ton might ignore that person completely. 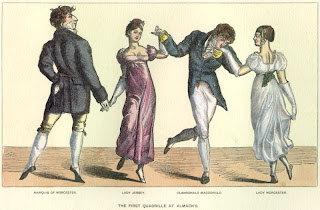 Intimate dances like the minuet were discouraged and the waltz wouldn't arrive on the London scene until the Prince Regent featured one at his ball in July 1816. He was promptly blistered in the press:

"We remarked with pain that the indecent foreign dance called the Waltz was introduced (we believe for the first time) at the English court on Friday last ... it is quite sufficient to cast one's eyes on the voluptuous intertwining of the limbs and close compressure on the bodies in their dance, to see that it is indeed far removed from the modest reserve which has hitherto been considered distinctive of English females. So long as this obscene display was confined to prostitutes and adulteresses, we did not think it deserving of notice; but now that it is attempted to be forced on the respectable classes of society by the civil examples of their superiors, we feel it a duty to warn every parent against exposing his daughter to so fatal a contagion." (Source: The Times of London, 16th July 1816)

A light supper was served at 11 PM. This consisted of day old bread, sliced very thin, with butter, dry cake (meaning without icing, probably something like a pound cake), lemonade and tea. As my hero remarks about Almack's refreshments, "Their very awfulness is the stuff of legend." No alcoholic beverages were allowed in the assembly rooms (though Grace's father hopes Crispin has a flask of something in his waistcoat pocket for 'medicinal purposes!').

As much as the patronesses despised "trade," they were in reality the sponsors of the most lucrative sort. Almack's was the de facto hub of the Marriage Market. The merging of well-moneyed, well-connected wellborn families was the subtext of each dance. It's the perfect place for Grace Makepeace to meet her future titled husband. (Which Crispin realizes he's not so happy about only after he arranges her debut!)

Has a dance ever made a difference in your love life?

PS. It's TGITTPATC! (Thank God, It's Time To Post At The Chatelaines!) I'm following up my Hunks in History post here with one on The Joy of Being Properly Tied Up (on cravats, of course! What were you thinking?) there! Hope you'll join me for a look at sartorial splendor in a great age for it!
Posted by EmilyBryan at 6:06 AM

Good Morning Emily! Oh I love dancing, I really do, but my husband NOT! NO WAY! So I resort to begging pleading and forcing him often! I never understand this he is a wonderful dancer!

My story to share though, is a few years ago we stayed at the most elegant Bed and Breakfast in South Carolina, it was an exquisite victorian mansion. They served dinner on Friday evenings and music was piped throughout the house. Allthough we were not having dinner, we were enjoying some wine and snacks the hostess graciously provided us, in what would have been a large formal parlor, it was off to the side of the main entrance and it was just a perfect romantic setting!Fireplace and all! My husband surprised me by asking me to dance with him!!! Out of the blue for no reason! I was stunned and moved to tears, it could not be more perfect. At the end a few couples had stopped and watched and they applauded! It was so romantic! I don't care if my husband never dances with me again. It was just magical that night!

How sweet, Jane! Men don't seem to realize sometimes that we don't need grand gestures. Small ones from the heart make us melt every time!

hi emily, the word "almacks" have been thrown around various romance regencies i've read and though i vaguely figured out what it is i didn't know the back story about the place. thank you for this! have a great friday! :)

Chelly--Backstory is my middle name!

Hi,
I attended a 2 Day,Cosmetic School in Hollywood. Several of the ladies went out that evening. A man asked me to dance. I said "No,thank you."
Time went on and the same man asked again. I said "OK."
He was dancing with me and asked, "Why did you say no before and yes now?"
My response was,"I was afraid I would step on your toes. I had a drink and do not care if I step on them now." He smiled and deliberately steped on my toes, then kept dancing. LOL
Have not thought of that in years.
We did not exchange names.

My DH wouldn't dance with me because he didn't know how. I know he was just embarrassed, but it really hurt my feelings when we were at parties or functions where dancing was part of the evening.

Then for Christmas one year, he gave me 8 weeks of ballroom dancing. It was the most wildly romantic thing he's ever done because it was the gift of his time as well. We had a wonderful time and he learned to love to dance because THE MAN GETS TO LEAD!

one question: How long did Almack's reign, do you know? Did it go on into the Victorian era?

Kathleen--I don't think so. The consensus in my Beaumonde Chapter is what it had run its course by 1850's, having been most influential from 1816- 1825 or so. The novel Almack's was published in 1840's so it still had a reputation of some sort at that time. By 1863, it operated as a restaurant and closely completely in 1890.

One of the reasons Almack's became so popular was that being presented in court was considered rather "fusty." However, in 1837, the 18 year old Victoria was crowned. All of a sudden there was a vibrant young queen and the elite had a new venue in her court for enjoying their exclusivity.

My husband and I are hopeless when it comes to dancing together. We can both dance, but not together. I think I'm guilty of trying to lead all the time. We did manage to get it right once while dancing at our daughter's wedding. We were doing our usual when suddenly we were in step and waltzing around the dance floor. We were both shocked. Unfortunately I love to dance all types of dances and my husband does not.

When we first got married, our neighbors did not dance in public. The religious group they belonged to considered dancing foreplay and only to be done in the privacy of your home.

Here's a tip! I take off my glasses when we go dancing. If I can't see, I'm not tempted to try to lead. And without my specs, I cannot see!