In Stroke of Genius, my heroine and her family visit Vauxhall, the public pleasure gardens famous for its romantic Dark Walks and intrigueing statuary.

Originally opened in 1661, the early days of the Restoration of the monarchy, the gardens were a return to the country for city dwellers. The alehouse surrounded by gardens was approached by a boat trip across the Thames, which was considered an important part of the experience. Revelers were sailing into a special world as they crossed the water. The entertainments were simple, often by street performers or spontaneous singing and dancing by the visitors themselves. It was popular with families but it was also a place where young men and women could meet informally without many of society's constraints.

Because the gardens were not exclusively for the upper crust, they were an ideal business environment for the working girls of London. Sir Roger de Coverley, who was shamelessly approached by a masked prostitute in 1712, told the proprietress of the alehouse "if there were more Nightingales, and fewer Strumpets" he'd be a better patron of the gardens. 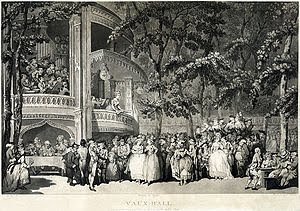 Vauxhall Gardens was open for business for two centuries. By the time, the Makepeace family from STROKE OF GENIUS visits it during the Regency era, the gardens were lit by 15,000 gas lamps by night, had countless pavillions and was accessible by a new bridge across the Thames. Concerts were formal affairs and the supper boxes a premier place to see and be seen. 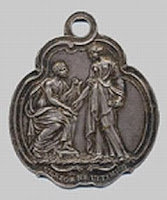 Admission was originally one shilling, though by the time of the Regency, it was 3 and 6 pence. Season tickets could be purchased for one guinea. Around twenty different patterns of these silver tickets survive, dating between 1737 and the late 1750s. Classical mythological scenes were on one side, with the subscriber's name engraved on the other.

In addition to the price of admission, the owners of the gardens made money selling food. The most famous item on the menu was ham, which was cut so thin that my heroine Grace Makepeace's father complains that he can "read a newspaper through it." Besides cold meats, salad, and cheese, Vauxhall also offered custards, tarts, cheesecakes and other puddings.

My heroine, who's led a pretty sheltered existence, is chiefly interested in seeing "the Dark Walks" (also known as the Druid Walks). This overgrown portion of the garden was known for being a trysting place and the scene of more bachanalian revels. The poet John Keats titled one of his works, "Sonnet to a Lady Seen for a Few Moments at Vauxhall." I doubt those few moments were filled with behavior beyond reproach.

Vauxhall Gardens closed on June 25, 1859 after the property had become increasingly run-down, tawdry and disruptive to the respectable neighborhoods which had grown up around it. The lease was sold and the property divided into hundreds of building sites. However, the garden was not gone forever. During WWII, the site was razed by the Blitz. It is now once again a park and conservation area.

Vauxhall has been featured in lots of books besides my STROKE OF GENIUS. One that comes to my mind is Jo Beverley's SOMETHING WICKED. Can you name a romance with a scene set in the pleasure garden? Or in any garden for that matter? What is it about green, growing things that turns our thoughts to love?
Posted by EmilyBryan at 12:27 AM

in Naked Visions Silver Blue Dreams my hero Michael sees Emily wearing a silver blue gown highlighted by moonlight at the entrance of the Dark Walk. In Dreams of a Raven Moon my hero accidently mistakes my heroine for his mistress. He thinks she is trying to trap him and spends the rest of the book trying to make it up to her.

Very nice article. I do love the idea of a mysterious world only a boat ride away. I reckon the residents of the city did also which is why the gardens were around for a while.

Fascinating. I don't write historical romances, but I read them. I'm sure Georgette Heyer had the Vauxhall Gardens in at least one of her books, but I can't remember which.

Did they have masquerades there, too? I'm sure I read a scene set in a masquerade there in more than one book.

Great post, Emily. I have scenes set in Vauxhall in my historical novel, TOO GREAT A LADY: The Notorious, Glorious Life of Emma, Lady Hamilton (written under my pen name, Amanda Elyot). When Emma was a teenager, she was a kept woman and a good-time girl; and she used to frequent the pleasure gardens of both Vauxhall and Ranelegh.

I also have Vauxhall scenes in my historical novel ALL FOR LOVE: The Scandalous Life and Times of Royal Mistress Mary Robinson (also written under the name Amanda Elyot). As a very young (age 15) bride, Mary was keen to visit all the places to see and be seen. She was ambitious even then. Not too many months later she became the most celebrated actress in London and loved to hit the pleasure gardens after a performance, scandalizing polite society by still wearing her costumes; she played some "trouser roles" because she was very slender, so she shocked everyone by showing up at Vauxhall and Ranelegh in her breeches.

Veronica--sounds like you've captured the magical elements of the place!

Liz--I think the boat ride was important because it was like a portal. Step through this door and you can suspend reality.

As I recall the first time we took our kids to Disney World, we rode a boat across a lagoon to the entrance.

The only book where I set a scene in Vauxhall so far, has yet to be published. It was my very first book, and without significant rewriting it sadly may never see the light of day.
As far as tidbits are concerned, I read that Prinny, not yet the Regent, was arrested by the watch for brawling in the gardens in the summer of 1781. Quickly released, I might add.

Offhand, I can think of two Heyers with scenes in Vauxhall -- The Convenient Marriage and Friday's Child.

Yes, Edie! In fact, Jo Beverley's SOMETHING WICKED featured a masquerade which allowed her heroine to become intimately acquainted with her family's deepest enemy.

Leslie--Funny you should mention "trouser roles." I did one once--Cherubino in the Marriage of Figaro. Trouser roles are a unique reversal. In an age not so far removed from when all players were male (and therefore some had to play female parts) a "trouser role" in an opera was always a male part played by a young woman.

What fun to be able to strut and swagger and scratch myself on stage!

Ann-What a delicious tidbit! I'll bet the watch was thoroughly chagrinned to have arrested their future king!

Don't despair over than unsold manuscript. I've got a bunch of them. They were my "training wheels" novels.

Barbara--I can think of another book with a garden in it--your Sunrise in a Garden of Love and Evil coming this April!

I love Vauxhall for this very reason--it's like this strange alternate reality, right in the middle of London. It's someplace you go after dark, it's green and lit up and glamorous. My book In for a Penny, which is coming out in a couple weeks, has one of the opening scenes in Vauxhall--the hero is there with his friends and his mistress, and sees the heroine with her family in the opposite box. I chose it because my protagonists both love music, and it was a fun, romantic setting that gave concerts, plus its respectability was ambiguous enough that it made sense that my hero could be hanging out with his mistress there. It's really a useful setting for writers in that way.

There's a Vauxhall scene in Sorcery and Cecilia by Caroline Stevermer and Patricia Wrede, if I remember correctly.

I still remember how surprised and embarrassed I was when I discovered it was pronounced "Voks-hall." I'd been pronouncing it "Voh-hall" (my first introduction to the spelling was "Vaux-le-Vicomte" in Man in the Iron Mask, which is pronounced that way) in my head for years!

Emily - LOL. Thanks for mentioning my book. It has more than one garden in it, although not the Vauxhall kind. :)

There was an article in a recent issue of Realm magazine about English pleasure gardens. As well as Vauxhall, it mentioned Ranelagh and Sydney Gardens, both of which are mentioned in books by Heyer.

Interesting question, Emily! In period historicals, as you say, gardens are places to escape from restraints and prying eyes, which is romantic in itself. But I think gardens (and forests and other parts of the outdoors) are romantic because they are outside our normal, hectic modern lives and appear less touched by time than streets and houses. If you don't look too closely, even Central Park could be the setting for a fairy tale: beautiful sights, lush vegetation, and the scent of flowers here and there...

I'm looking forward to summer again. Can you tell? ;)

Rose--Interesting that your characters are both drawn to the music at Vauxhall. It was the first musical concert venue that reached a mass audience with over 100,000 attendees per season.

Nynke--I think there is something in the human heart that craves beauty. When I look out over the Mystic River and the park leading down to it, I always feel better.

Nice article on Vauxhall Gardens. It seems the Gardens are referenced in most Regency books that have a young woman coming out in London. I had no idea they had such a "long run." It is too bad it doesn't exist anymore. Of course the atmosphere wouldn't be the same. It certainly would be wonderful to go back in time and experience them when they were at their best.

Very interesting post. I love history even though I don't write historicals.

One romance novel that has a powerful scene set in Vauxhall Gardens is Seduction by Nicole Jordan where the heroine is unknownly presented to her dead husband's mistress. Also, I believe there was a dance floor in the Gardens as I seem to remember the couple in another novel dancing there. Thanks for the lovely article.

Pat--It was interesting to me that even though the site isn't the same, with all the statuary (the one of Handel for example found its way into Westminster Abbey) and pavillions, but the ground has reverted to a park and conservation area.

Thanks, Sandy. I enjoy books in other genres besides historicals. A good story is a good story whenever it's set.

Carol--I love Nicole Jordan's work! She and I have something in common--Park City, Utah (See my post on I Ain't Afraid of No Snow!). I'm not sure if she still lives there, but at one time she did.