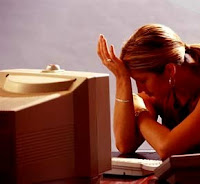 There are many reasons a manuscript may be rejected, but given the number of submissions they receive, editors rarely have time to tell the writer why.

Sometimes, it has nothing to do with the writing itself. Perhaps the editor just acquired a story with similar elements and the list doesn't have room for two.

Editors are people too. Sadly, your story might just land on their desk on a bad day.

But quite often, the rejection is all about the writing. I was checking the Carina Press blog and Angela James has listed a number of common problems there. I thought I'd elaborate on a few of them here for you.

POV problems~As a general rule, a writer should stay in one head per scene rather than pinging back and forth between characters. You risk giving your readers whiplash.

But wait, I hear you saying, Nora Roberts head-hops! Yes, she does. But she does it with such skill only those of us who look for point of view tells realize it. If you must switch POVs mid-scene, write a POV neutral paragraph before you place your readers into a new consciousness.

Overuse of Adjectives~There's no substitute for using specific nouns and descriptive verbs. Why say 'small bird' when you can say 'wren?' Don't let your characters walk when they can stride, shuffle or glide. I especially love using nouns as verbs. In STROKE OF GENIUS, my heroine's mother 'swans' across a room. In one word, you get a vivid image.

Telling rather than Showing~Readers read because they want to bring something to the experience. They want to use their imaginations and read between the words for the real story. If I say "John was angry enough to be violent" I'm insulting my readers by telling them something they could figure out for themselves if I say "John was a tornado boiling over the horizon."

Awkward Dialogue~Dialogue in a book cannot be totally realistic. You have to ping back and forth and leave out the boring stuff that clutters real life. And you absolutely cannot let a character give an information dump disguised as conversation.

Internal dialogue~If you invite your reader into your character's head, make sure it's real. A person's secret thoughts should be eye-popping, relevatory and unique. Don't bother inserting a thought that a reader could infer from the character's actions. A double no-no is having your character think something and then say the same thing.

Full of clichés~Simile was a Victorian parlor game. At that time, the point was to name the common saying--quiet as a mouse, smart as a whip, etc. No one wants to read them now. Make sure your writing is fresh.

Grammatical errors and misspellings~Don't give your prospective editor/agent a reason to say no to you. If you don't have the grammatical skills, find someone who does. Spell check is your friend. Writing is an art and a craft. Grammar and spelling is the easiest part of craft. A writer's job is to make her editor's job easier. A clean manuscript means you understand your job.

Poor Characterization~From the first page, your characters need to breathe on their own. Don't introduce too many all at once. Give them unique names. Tolkien may have been able to get by with Eowyn and Eomer, but most of us give our characters names that start with different letters.

Hope this helps you. These are all things I remind myself of with regularity. When/if I receive a rejection, I want to make sure the problem isn't with the writing.

One of the things I have to watch for is sentence length. I never met a clause I didn't like. Commas are my favorite punctuation. Part of my editing process is going through and splitting my over-long sentences into more manageable short ones.

What do you have to work on?
Posted by EmilyBryan at 2:38 AM

More useful advice, thanks Emily. I tend to favour the comma, and have to split sentences. I have learned so much in a year of attempting my novel. I am ready for rejection, it is the satisfation of finishing my wip, that I am looking for now.

I can't believe how much I too have grown and learned this year going through the editorial process. You make terrific points, ones that can help at any stage of writing. Thank you!

Glynis--What a beautiful attitude! "Ready for rejection." It also shows you're thick-skinned enough to live in WriterLand.

I go to school on every single story that flows out my fingers. Writing involves an ocean of skills to master, but it's sure fun to paddle around in!

Gayle Ann--Writing is a growth process. Not just in learning how to be an effective storyteller. Writers have to visit places in their psyche they sometimes wish they didn't even have.

I just had contest entries back and one judge complained about my many commas. lol

I agree With Glynis, rejecton is the satisfaction that you finished and were brave enough to send it out! For me it is an opportunity to do better, be a better writer, work harder, write cleaner. So It'S ok! Better a no by an editor than under the bed and never had a chance to improve it!

What do I need to work on? I use "that" alot. I like it. I like the flow. Sometimes without it, the flow seems to be interrupted or choppy, but for the most part, I know I don't need it. My crit partner has been highlighting every time I use it and I cringe when I see all that yellow. God, I appreciate her more than cake.

I like to start sentences with "But" and "And" because I'm not supposed to. So, I have to watch that I only do it for effect and only so often.

But yes,(Hehee. I just did it.) rip me a new one. I can take it. I can't improve my craft unless I know what I'm doing wrong.

Really, there's nothing anyone can say to me that comes anywhere near what I heard on a daily basis at the prison. Thick-skinned? You could say that. I've got an outer layer like the space shuttle.

When I was working as an editor, one of the things I said to writers most often was that editors are just people with opinions and we all know what they say about opinions, right? *grin*

If you can learn something from rejection, great. If not, add it to the file and keep trying.

And I forget to spellcheck blog comments sometimes.

Edie! We must have been separated at birth! I love long convoluted sentences with lots of commas. But if I can't finish a sentence in one breath, it's too dang long!

Jane--Absolutely! Of course, we work to minimize the chance of a no, but it's always better to try than to quit.

I used to teach with a fellow who loved to tell how he was invited to try out for a pro-baseball club. But at the last moment, he decided he didn't want a ball player's life (yeah all that travel and money is such a bad thing!), so he walked off the ball field without going through with the try-out. He'll never know if he could have made it, but he congratulates himself on deciding to fail. That's sad.

You'll never know if your manuscript can be published unless you submit it.

Saranna--The prof for my one college writing class had a couple of pet peeves. "Alot" was one of them. The word "get" was another. She red penciled them every time.

Emily, I know the feeling. I had an AP English teacher in HS who would blow a gasket if one addressed the reader as "you" or used "very" or "really". She'd start bellowing lines from Shakespeare. She was a trip.

My high school English teacher would start a sentence, think of something else and walk out of the room. When she came back, she'd finish the sentence she left dangling. No lie!

It's a wonder I can put two words together!

Interesting post, Emily. Thank goodness, I've come a long way, and I don't do most of those things now. Well, maybe the comma. Smile.

Sandy, it seems like I fix one failing and another will rise, hydra-headed, to replace it! I'm beginning to suspect the writer's craft is a never-ending learning curve.

Hi Emily,
Thanks for the information.
I wrote down the words mentioned here and will have to start leaving them out and editing the ones already in my writing. // seems //// I use all of them ////.