Depending on who you talk to, there are supposedly only 7, or 20, or some other arbitrary number of basic stories in the world. (Sort of a secular version of Solomon's lament "There is nothing new under the sun.") What they mean is there are only a few foundational themes and all stories are variations of these seminal ideas.

There are Revenge stories--Moby Dick and The Count of Monte Cristo fall into this category. Quest stories--Lord of the Rings, and basically all fantasy literature falls into this column. There are Buddy stories, Coming of Age stories, Child in Jeopardy stories, Redemption stories and of course, Love stories.

The underlying themes are the same within each category. What makes it interesting, we hope, is the author's execution of the theme.

For STROKE OF GENIUS, I drew on my passion for mythology for inspiration, specifically the Pygmalion myth. Pygmalion was an incredibly gifted sculptor who fell in love with one of his creations--an ivory form of a woman whom he named Galatea. Problem--As lovely as ivory is, it's no match for flesh and blood. So Pygmalion went to Aphrodite and begged for her help. The goddess of love was in a giving mood and turned the statue into a real live woman. Pygmalion and Galatea got their Happily Ever After handed to them on an Olympic sized platter. The end.

As you can see there are several problems with adapting this story for a romance. For one thing, there's not nearly enough conflict. Pygmalion's problem is solved by a third party instead of through his own efforts. Not terribly heroic. And what about Galatea? She's pretty much a cipher who does what's expected of her, whether she's in ivory or skin and bones. 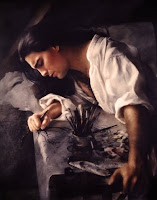 So I made my Pygmalion (aka Crispin Hawke) an arrogant SOB, brilliant but with a chip on his shoulder. He delights in messing with people's heads. He's not looking for love. It blindsides him.

And my Galatea (Grace Makepeace) is a Bostonian heiress who is seeking a titled husband to please her mother, but really wants to see her secretly penned mythological stories in print. Bookish, overly tall, and opinionated, Grace isn't the sort of woman most titled gents seek. When Crispin agrees to help make Grace fashionable, he doesn't intend on falling for her himself. He only wants to manipulate the ton for his own amusement.

When Grace catches the eye of a marquess, Crispin is no longer amused.

So you see how I've taken the basic shape of the Pygmalion myth and altered it for my purposes. Think for a moment how many Cinderella stories you've read. How many variations on Beauty and the Beast?

Noted psychologist Carl Jung thought the building blocks of stories are floating in our collective consciousness because we all tend to respond to certain hotbutton touchpoints along a story's path. Humans crave pattern and repetition. But we also enjoy variation on a theme.

I recently read and enjoyed Loretta Chase's LORD OF SCOUNDRELS. It was Beauty and the Beast all the way, but recognizing the bones of the story didn't diminish my enjoyment of it one bit.

What was the last book you read? Is there a ghost of a fairy tale or myth embedded in the structure of that story?
Posted by EmilyBryan at 7:09 AM

There. I've pre-ordered A Stroke of Genius. When is it due again? :)
I really like your new-and-improved version of Pygmalion, I think; while the original story is nice (and sexy) in a way, it's also very, very one-sided and sexist; the statue come to life is never really more than a cardboard figure, and Pygmalion must be an idiot if he's satisfied with that. Grace and Crispin will do much better! :)

I'm so excited to read this story, I can hardly wait! I have not read in so long, I am taking a writing bootcamp and it is kicking my butt! LOL! Have a great week!

Thank you, Nynke! Stroke of Genius is due out May 25th, but since you've preordered, it should come a few days before that.

Hope you love it!

Jane--I hope you enjoy the character you helped create with your naming of him. Brice Wyckham, Crispin's gentleman's gentleman, gets a side romance of his own with Grace's French maid, Claudette.

The very last book I finished was PERCY JACKSON AND THE LIGHTENING THIEF. That certainly falls into the category of Quest.
Prior to that, it was WARRIOR'S BRIDE by Gerri Russell which I would classify as a Cinderella type of story.

Lori-Cinderella works almost every time it's tried. Who doesn't pull for the girl with so many strikes against her?

Pat--Yes, Percy was definitely a Quest. I hope the book was better than the movie (they usually are!) I was frankly underwhelmed by it. Though seeing Pierce Brosnan as a centaur was a treat!

I'll be taking my 11 year old grandsons to see PERCY next week. I enjoyed the book, but it is written for the middle school set and reflects that. Everyone I've talked to that has seen the movie has enjoyed it. Just from the previews I can tell they changed a bit of it.