The Joy of Being Properly Tied Up! 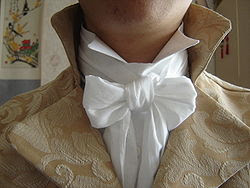 Now, now, this is a PG-13 blog. Despite the title of this post, it's not about what you think. It's about Regency men's fashions--most specifically the blazingly white cravat favored by all young bucks during the time when STROKE OF GENIUS is set. Just as Beau Brummel changed the shape of men's fashion for all time, cravats were the precursers of the modern necktie. But cravats were tied in more unique configurations than an origami master can imagine to fold a square of paper. 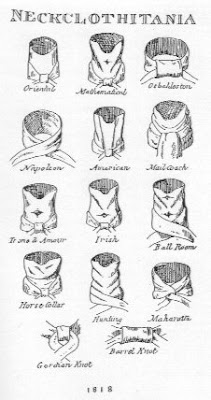 How a man chose to tie his cravat revealed a good deal about his taste and sense of self. (And, one might argue, the nimbleness of his valet's fingers!)

Cravats were always of white linen, and heavily starched to hold their shape (part of what made the cravat such an effective weapon for my heroine in A CHRISTMAS BALL, when she ripped the scratchy, stiff cloth off my hero's neck!). Later, the flowing "Waterfall" style was popularized by the poet Byron and less starch was required. When Beau Brummell, the arbiter of Regency sartorial splendor, fled to France (after alienating the Prince Regent with his infamous "Who's your fat friend?" remark) other colors besides white were introduced. 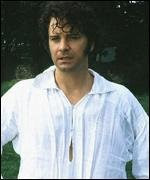 So what was the appeal of the cravat?

As with all fashion, the point is to be more attractive to the opposite sex. IMO, the lure of the elegantly tied cravat is in imagining how much fun it would be to untie it!

What do you think? Sometimes fashion goes to ridiculous lengths. What male fashion, past or present, do you think crosses the line into obsession or just plain weirdness?
Posted by EmilyBryan at 9:47 AM

I know one male (and female) obsession is tattoos. I don't think I would mind a little one, but some of these tattoos that cover entire body parts or a person who has a zillion of them is not something that appeals to me.

The cravat's intricate knots would have made me crazy since I can't even seem to knot today's ties. My luck, I wouldn't have been able to untie the cravat when I wanted to pull the Regency hero close for a kiss! :)

Not being into pain, I pass on any fashion ritual that involves needles.

Of course, my DH says ties are a pain too. Fortunately, he rarely wears them now.