The following is an excerpt from my MEAT ON THE BONES workshop about characterization. For writers, I hope this helps you. For readers, here's your chance to peek at some of the background work we writers go through to create our characters.

Romance is character-driven fiction. We are drawn to certain books over and over again not because of the interesting plot twists, but because of the characters. The author has created characters who breathe on their own. How do they do this? They know their characters very well and expose enough of their souls for us to connect with them.

There are things you MUST know about your characters, even if nobody else ever does!

So let’s get to know our characters. We’re going to start with their names.

What’s in a Name? A person’s name stands for all they are. It represents the character’s integrity, their word, and how others perceive them. John Procter in The Crucible went to the hangman’s noose rather than sign his name to a document that would have saved his life because the document required him to lie. All he had to do was admit to consorting with the Devil and sign his name. But it was his name and by extension, the name of his three sons. He chose death rather than surrender his good name.

So how can we get the most mileage out of our character’s name?

• Encapsulated character trait- We can choose a name that tells something about the person: Hope, Felicity, Rocky, Studwell, you get the idea. Of course, this sort of name really tells us more about the character’s parents and their hopes for their child, so right away you already have a sense of the other people who inhabit your hero/heroine’s world.

• Name’s meaning- Even if you don’t tell the readers, you should know what the name means. There are plenty of baby name sites on the internet that will give you meanings of 1000’s of names. The name’s meaning can be used to choose character traits for your h/h.

• Strong vs Weak Consonants-If a man’s name is Phil Small, you’re probably not visualizing an NFL linebacker. Or perhaps it’s a name which needs to be ‘overcome’ like the boy named Sue. Only his author knows for sure, but generally speaking, names with hard, percussive consonants are considered stronger than those with softer sounds. The one exception for male names are those beginning with “J”. This soft sounding consonant still resonates masculinity to most readers. Think Jamie Fraser.

• Ethnic & Period Authentic Names-The Social Security Administration keeps name lists of popular names for each decade. http://www.ssa.gov/OACT/babynames/ If you’re writing a contemporary, check the names from 20-30 years ago for your characters. If you write Regencies, this little name generator is a fun toy. http://www.ugoi.net/nonsense/name.html . If you write ethnic characters, there are plenty of internet sites with names grouped by ethnicity.

• Sharp Name Delineation- Tolkien may have gotten away with Eomer and Eowin, but your readers will bless you if you choose names that are not similar sounding. I prefer not to have names in my cast of characters that start with the same letter no Mikes along side Marys.

• Name Changing- A character might acquire a new name through the course of the story. A pillow name, a nickname, a slander, changing a person’s name signals character growth. In my DISTRACTING THE DUCHESS, my hero calls the heroine Artemisia by her “milk name” Larla, which means ‘darling,’ once they become lovers. 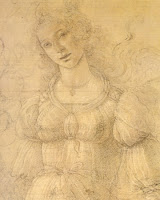 In my new WIP, STROKE OF GENIUS, my heroine’s name is Grace Makepeace. She’s a Bostonian heiress and her Puritan roots are showing. But the name Grace is a bit of a misnomer because Grace is anything but graceful. Tall and gawky, she’s awkward and uncomfortable with most social situations. But because she’s called Grace, there is an implied character growth arc in the name, which gives me some ideas for plot as well.

Grace means “unmerited favor” and carries the connotation of redemption, which also gives me the idea that she’s going to be redeeming someone—most likely my badboy hero. Do you see how the very names of your characters can suggestion plot points?

Grace Makepeace is made up mostly of soft sounds, except for the GR at the beginning, which to me suggests that she has strength of which she’s not yet aware.

I’ll make certain not to have any other characters starting with G in my story and I’m still trying to decide if her name will change. Grace can’t be shortened into a nickname, but she could be given a new name by another character. 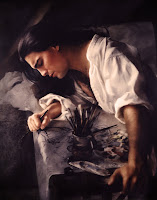 Which brings us to my hero, Crispin Hawke. Crispin is an artistic genius (hence the title of the story!) who’s been engaged to model Grace’s hands in marble. His surname Hawke hints at his keen observation skills and he’s been using them on the ton of London while he practices his art. Cynical, but brilliant, he’s just the man to help Grace beat the ton at their own games.

Crispin means “curly haired,” so looks like my hero is going to have some natural curls. In the time of Byron, this was a good thing for a man. Crispin was also a 3rd century saint, so I can play up my Crispin’s non-saintly attributes.

Crispin Hawke is a strong name, bookended with the hard “K” sound. But the soft ‘h’ in the middle suggests a softer side hidden beneath his carefully placed armor.

Grace will call him ‘Cris’ almost immediately and it will irritate the fool out of him.

I'll be home tomorrow and ready to start working on Grace and Crispin's story again. Hope you've had a great week!
Posted by EmilyBryan at 1:36 AM