Never Underestimate the Value of a Good Haircut! 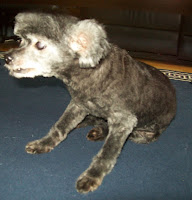 This is Susie, my 16 year old "papi-oodle-huahua." As nearly as we can figure, she's a poodle-papillion-chihuahua mix. After adopting her from the pound in Sheridan, WY, we've had her 11 years. The people who dropped her off claimed she was 5 at the time, but when we took her to the vet, he said she was likely older. So know one knows how old Susie really is and she's not telling.

But her arthritic little bones are dropping hints. Some days, she cripples around on three legs and even though I slip her a daily "mickey" to ease her aches, I worry that she may be in pain. My friend Bonnie Vanak had to put down her beloved "Tig" recently and her grief reminded me that my days with Susie may be winding down.

Even so, when the weather finally warmed up enough in New England, it was time for Susie's summer cut. During the winter, she turns into a powder puff with feet. (I really should have taken a "before" pic, but unlike Mack, our hammy Jack Russell, Susie doesn't like having her pic taken. She was hiding under the coffee table in the one above.) So yesterday, she got a sleek shave and amazingly enough, she knows she looks better. She felt so good about it, she actually stretched out and ran down the hall to our condo. She's been prancing around ever since.

As a full-time writer, I'm more likely to "plath around in my sluvvies" than most people. After all, I don't go to an office. Sometimes, the only reason I poke my nose out of doors is to walk Susie and Mack. I'm just as productive in my jammies, but perhaps I need to start treating myself to a little make-up on regular days, not just when I'm at a writer's conference.

What do you think? Does how you look effect how you feel?
Posted by EmilyBryan at 7:50 AM

Oh, definitely, although I don't have to be "dressed up" to feel good. It's more that I have to be comfortable. A pair of sweats and a tank top and I'm good to go ... as long as my hair isn't totally freaked out!

I was just thinking about how nice it was to "dress up" when I was at the RT conference because I am such a jeans and t-shirt gal all the rest of the time. All my cute clothes and baubles are so wasted on me.

That said, I love my comfy clothes.

Wouldn't it be wonderful to live in a world where all the cute clothes and shoes were as comfy as our sluvvies?

As someone who just lost both her babies recently- the first we put down so she wouldn't be in pain, and the other just didn't like being alone, we think- I know what its like to start thinking about that decision. But you'll know when its time, she seems to have a bit longer left in her spirit.
But I also have to dress up on regular occasions, sorority goodness, and I also am a writer who spends every day not in class in my jam jams. Being comfy helps the juices run smoother, but getting dolled up every once in a while is like a little treat. I just don't want to take the cloths off because I feel so pretty in them. I think its becasue of how much time I DON'T spend dressed up. It makes me want to go and conquer the world!
and fyi, the key is you have to shop around ALOT to find the comfy pretty things...

I'm sorry for your loss, Christine.

If I have to shop a lot to find comfy, pretty clothes, I'll never have them. I am still the anti-shopping queen.