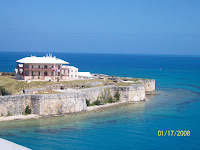 Just returned from a wonderful week aboard NCL's Spirit. This was our first trip to Bermuda and we had a ball. This pic is from the balcony of our stateroom. We were tied up at the Royal Navy Docks, right across from this 19th century British fort. Since I love all things historical, you can imagine how excited I was to tour the breezy 2 storey Victorian era Commissioner's house! And yes, the water really is that vibrant turquoise! 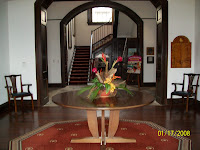 The walls are plaster over two feet of limestone block, the design aimed at surviving both hurricanes and tropical heat. But as usual when the Brits go gallivanting, they bring their culture along. The house is furnished in elegant style with a masculine flavor as befits the leader of the group of fighting men who were stationed there. 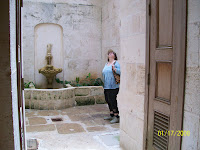 But though this was a military installation, there was a lovely secluded courtyard in the center of the block structure. Even tough guys need a certain amount of beauty and solitude. I'm looking up into the endless blue of a Bermudan sky! 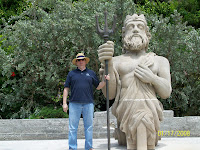 Overlooking the parade grounds below the residence, my DH decided to challenge Neptune for his trident. My money's on the DH! Don't you love that Panama Jack hat!

We were so obviously tourists, but everyone was friendly and polite. After being hounded by people trying to sell us things in the Caribbean, the Bermudan laid-back style was so refreshing. We met several American ex-pats who've emigrated to the island. Amazingly, you can't go to Bermuda to retire. You must be gainfully employed before moving there and only certain jobs can go to Out-Islanders.

I'll be sharing more pics later! And even some today at THE CHATELAINES!
Posted by EmilyBryan at 2:35 PM

Welcome home! Pics look beautiful. One day...Bermuda is on my list of places to cruise to...

Hope you feel all rested and sunbaked...

More like rested and sunburned! I don't tan. I get "lobsterized" and peel. So I try to avoid sun, but my neck and shoulders got a big dose.

But it's worth it to be surrounded by so much beauty.