We have a winner: RK Charon! Check the comments for instructions on contacting Jade for your prize. Thanks to everyone who commented!

How do multiple author series find their way to the book shelves? Please welcome my friend Jade Lee who's got all the answers! She's sharing about her involvement in the Crimson City phenomenon and the possibility of a second round of those inventive paranormals. My blog is yours, Jade.

Some years ago, I was at an RT convention when my editor invited to be part of an exciting new series called Crimson City. Due to a last minute problem, Love Spell and series creator Liz Maverick needed someone to write book 5 Seduced By Crimson very fast. Fast meant in about 2 months and since speed has always been one of my strengths, they invited me in. I took about one second to decide, but because I wanted to appear less-than-anxious, I delayed answering for at least 10 seconds. That was as long as I could hold out. Then I came home from conference and told my kids they could go to whatever summer camps they wanted, but they had to go. Fortunately, they were at the right age to want to spend all their time at volleyball camp, horseback riding camp, swim camp, and get-me-away-from-my-lame-parents camp. To this day, I don’t know if I made a profit on this book or not. My children took me to the cleaners that summer, but on the upside, I got to write for Crimson City!

The world is rather simple and yet so rich with intrigue and romance that I was stunned by Liz’s ingenuity. Vampires live in wealthy high rises, werewolves haunt the subway tunnels, and humans live in the middle trying to stay safe against the paranormals. All this happens in Los Angeles that has been nicknamed Crimson City because of the race riots (and I don’t mean riots based on skin color). In an attempt to balance the power against the paranormals, humans have two projects going on. The first is a cyborg project that creates half human, half machine mechs. The second is to open a dimensional gate to a demon world that decides to invade. Oops. Silly humans! Oh yeah, and I got to create human magic-user Druids. I needed an infusion of greenery into urbanized Los Angeles.

OMG what fun this was! Especially since book 5 was the demon invasion! All Earth species came together to fight off mega bad demons! The series was an instant hit, put me and Marjorie Liu on the USA Today list, and brought me some friends for life!

You’re probably wondering why I’m talking about this. After all, the primary series came out in 2006 with an anthology in 2007. Old news, right? Nope! Liz is reviving the series with a new book out this month! Crimson Steam is an origins story that talks about how the paranormals were created about a century ago. There are elements of steam punk, hence the name, and the possibility of a second Crimson City series. I, of course, am thrilled, thrilled, thrilled about this possibility! 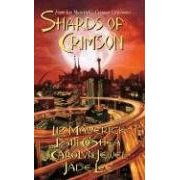 So...any thoughts readers? Who here has read the series? Who wants a second series of books? Raise your hand...er...I mean, leave a comment, and I’ll give a free Shards of Crimson (anthology) to a lucky someone!
Posted by EmilyBryan at 2:08 AM

You had me at 'steam punk'- lol! Actually, just stopped by to give Jade (and Emily!) a big shout out, and have my morning fangirl moment. Even better, I apparently now have a few books to add to the 'must read' list. (Salutes.) Will do!

Speaking of someone who knows how to put a kickin' series together ... hi Jessica! If you haven't tried her Nightkeepers, hop over to Jessica's website. It's an adventure all in itself!

I love Crimson City Series and am very glad to see the revive of the series with Crimson & Steam.

Hi May! Just popped over to your blog. Of course, I can't read a word of it, but the Thai alphabet is so cool to look at. All those curly little squiggles ... :)

Hi :)
Thank you for sharing here Jade. I haven't read the Crimson Steam series but it sounds like a great series. I love those type of books, like the Thieves' World series, Heroes in Hell series, Wild Card series, Merovington Nights series. Shared world with different authors and characters is so awesome.
Here's to an excellent 2010!
RKCharron

Working on the Crimson series with Jade was such a great experience. Fun to come here and read about it--I remember when! Crossing fingers Crimson & Steam won't be the end. :) Liz

Jessica! We love you too! And yes, I second the check out her series! Anyway...hello all! RKCharron--I love shared worlds too. It's so much fun to see how different authors expand the universe. So...here's hoping Crimson takes off as big as Thieves World!

So, Jade, are there going to be more "tigress" books?

These books all sound wonderful. I'm going to put them at the top of my "to be read" list. Congrats, Liz on the new book!!

I have actually never heard of this series. SOrry :-(

Now I have heard of it, and it has been to my Hunt Down and Find list.

I'm so glad that you came on and talked about it. Becasue I may have never heard of it otherwise.

Sad to say I haven't read any of this series yet. They sound fantastic and I will most assuredly check them out. I really enjoy all of Jade Lee's Blazes. Hot Hot Hot.

I loved the Crimson City series, as well as the anthology. I can't wait to read Crimson Steam and I would be thrilled if a new round of books in the series were to happen. Anyone that hasn't read the series should do so now, all the books are fabulous.

Emily...no more tigress books. Historical China -- even SEXY historical China -- is a fringe market and those aren't doign so well these days. So I've gone back to the steamy underbelly of London (regency). Wicked Surrender comes out in September and I LOVE that book!

BUt lest you think Jade Lee is gone for a long while, Feb brings a reprint of Devil's Bargain. It was Jade's first book and yes, steamy underbelly of London (regency). Love my steamy historicals! So...hopefully, someone will check that out too!

have I answerwed all questions?

Random number generator produced: RKCharron! So...RK...if you wnat a copy of SHards of Crimson...just email me your snail mail address at jade at jadeleeauthor dot com. (no spaces)

and thank you emily for checking out and commenting my blog! so awesome! i can't believe an author actually following it so thank you!! :D

Jade--Well, I LOVED the Chinese part of your Tigress books. Thanks to you, I have lived the life of a Chinese woman. I'm sad not to see more. Thanks so much for guesting here today and please come back when your Kathy Lyons title hits the shelves!

Dennis--Thomas Doverspike is the rough-edged alter-ego of my Victorian spy hero Trevelyn Deveridge in DISTRACTING THE DUCHESS! He was great fun to write and I love the name Doverspike!

Chelleyreads--You have a terrific blog!

Chelleyreads-- THANK YOU THANK YOU for loving Desperate Tigress! I love that book and was afraid that no one else did! Thank you! You've made my week!

Have not read these books.
What I read here about them is great.
Something that good needs a second series.
I always like where they go back and tell how things started.