I Ain't Afraid of No Snow! 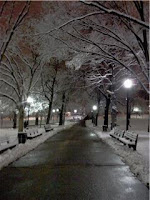 I realize this is an abrupt shift, coming off a post on the verdant Vauxhall Gardens, but Boston is bracing itself for a winter storm today, so my thoughts have turned back to snow. We're expecting 4-8 inches--or as they say here in New England, "a dusting."

New Englanders are a hearty lot and they don't let snow slow them down. They can't. Snow is a fact of wintry life here. We get "nor'easters" (think of a midwestern blizzard and then toss in the extra fun of hurricane force winds!)

Don't get me wrong. Park City is drop dead gorgeous. I adored our place on the mountainside. (We were at 7200 ft. in elevation and I was in the best aerobic shape of my life. Just cleaning my house there was a workout.) 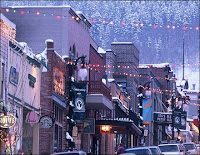 The short summers were cool and delicious and we could count on seeing moose in our extremely steep backyard. Because the town's economy was very seasonal, all the lovely restaurants and shops ran specials for the locals during spring and fall. The quaint little "downtown" is a picture perfect blend of art galleries and boutiques. For years, it was the site for the Sundance Film Festival and it wasn't unheard of to see Robert Redford in line at the grocery store. While we lived there, Park City was host to some of the 2002 Winter Olympics events. The world came to visit and it was a heady time.

But the first year we lived there, we got 5 FEET of snow over Thanksgiving weekend. We were out every hour trying to keep up with it and make sure we didn't get trapped inside the house. We started the winter with two snowblowers. We wore the older one out within the first month. While my DH was at work, I had to blow off the drive way a couple times a day, just to make sure he'd be able to get back in that evening. By December, our snow blower couldn't throw the new snow high enough to get over the twelve-foot wall of the stuff that surrounded our driveway. My DH would fill up the back of his pick-up each evening and haul it down to Salt Lake City the next day so it would melt while he worked.

Not only was there lots of it. Once the snow came, it stayed. The last of the snow finally melted in June. Seven months of snow is four months too many for me. When we left there for temperate Seattle, I felt nothing but relief. You don't have to shovel rain.

Park City taught us a valuable lesson. When we learned we'd be coming to New England, we took winter into consideration when we made our housing choice. We bought a condo with easy access to the T. We don't have to shovel. We don't have to drive in it.

I ain't afraid of no snow. Bring it on, winter. I'm ready for you this time!

How about you? Do you deal with snow where you live? Or are you a snowbunny who loves it?
Posted by EmilyBryan at 5:36 AM

For the first ten years of my life, our family lived on top of a tall hill in Westchester county, NY, and our bottom-of-the-hill neighbor was a snowplow operator. However much white stuff we got, all we had to do was sit tight and Dave would be there. (do we get extra points that he was a Scottish emigre?)Sometimes it would be quite a while, but that never phased me. I think I'm part snow bunny.

Which would explain why I picked Montpelier, Vermont, for my first two years of college. Three seasons there; fall, winter and mud. Plus snow. Lots and lots and lots of snow. I will never forget the five to six feet of snow we got overnight once, completely trapping students in the dorms until buildings and grounds could dig tunnels to the infirmary and cafeteria.

Then I married an LA native. He has since learned about snow.

I love the winter and snow. Spent my college years in Rochester, NY, where it often snowed from October through April. Then we lived in Chicago. Where I learned it always snowed horizontally. Depending on which way the wind blew, you would either have a frozen driver's side door or passenger side door on your car every morning.

It wasn't the snow that got to me in Chicago, it was the unrelenting dampness.

When we moved to New England, I was really shocked at how poorly the folks here handle snow. You'd think they'd never seen the stuff before, based on the panic at the grocery stores and the hysteria of weather forecasters.

I love a good storm. It slows people down. It reminds us that we are not always in control. That the universe is bigger than we are. Blizzard=instant zen. :)

Good Morning Emily! Thoughts going out to all our East Coast friends!Please, stay safe and warm!

I live in Minnesota! UGGGG! need I say more! I dont mind snow, its cold and ICE that terrify me, I have seen so many horrible accidents due to ice, that it makes me shiver thinking about it!

Follow up from Mondays Blog: OK I am going to submit my idea! Thanks for the advise Emily! Also Yes I did check out the Dorchester contest sites and signed up for a couple!

Anna--There is something soothing about being snowed in. Sounds are muffled. Events are cancelled. You have a perfect excuse to put up your feet and get lost in a book.

How's your LA native feel about the white stuff?

If you want to see snow hysteria, go south. When we moved to NC, we were shocked that school was cancelled for a half inch snowfall. 8 inches of snow paralyzed the city for over a week. I don't know how they're dealing with this truly awful 20+inches and more to come.

Jane L--I'm with you. Snow is better than ice. I totalled a car in 2007 during an ice storm around Kansas City. I spun out, fishtailed across two lanes of traffic, plunged down a 20 foot embankment and took a header into a light pole. Fortunately, all we lost was the car (which was paid for!) I was listening to Dave Ramsey on the radio just before the accident and I'd just said to my DH. "Isn't it nice not to have a car payment?"

Little wonder we opted to arrange our life so we didn't have to drive in winter here.

Apart from his first winter before he learned the concpet of "coat," he's adapted well. He doesn't share my delight at the white stuff but he accepts it as a fact of life and white Christmases are fine by him. He understands the neccessity of keeping the front steps from getting slippery and is on top of that like it's a paid position. :)

Raised in Savannah GA I cringe at the word snow. I hate the cold. How I ever allowed myself to be talked into moving to Iowa is beyond me. But moving there I did and met my husband who loves me very much. He knows how much I hate the snow so he moved me back to GA. Granted it is not Savannah, but I don't get the snow and when we do it is only a dusting of 2 inches or so and everything shuts down.

I actually drove in it for the very first time last month. I refused to drive anywhere in Iowa when there was snow on the streets! It is definitely an experience and not one that I relish repeating especially in the states that actually get snow!!

Coming to you from frigid Long Island, NY, where yes indeedy, we're racking up the snow. 10 inches so far and expected between 8-12 more. I'm shoveling for all I'm worth and thankful that it was early in the year and I had some personal days to take off so I didn't have to brave the Long Island Rail Road. For me, it isn't the cold, or the snow or having to trudge through it to the birdfeeder. The problem with snowstorms is the people madness that ensues. The reaction is something akin to the mass hysteria in the Dennis Quaid movie, The Day After Tomorrow.

Hi Emily
Live in MO. We are having cold lasting longer and lower temps than usual. Electric doubled last month and this month is doing the same. Had lots of snow. Retired,I do not have to go out if it is real bad. So I can play on computer. But the roads have been pretty good where I am. No shoveling needed unless the street guys pile the snow in the driveway.

I grew up in Upstate New York about 65 miles south of Montreal, Canada. We have lived in Northern Maine and Colorado Springs, CO. We live in Tennessee now, and I do miss the winters. We have not had a winter like this one since moving here. We have had more snow and cold weather this year than they have had in a very long time. It is a quirk of the weather that we and my sister in Virginia have more snow than our family in N.Y. The biggest problem with us getting the weather we have lately, is the area is not equipped to deal with cold, ice and snow. I think the schools have been closed more than they have been opened in January and February. I don't miss the bitter cold, the shoveling, and that dirty, slushy mess that you need to contend with in the spring. Actually, that is what I loved about Colorado. You would get two feet of snow, then a week later it would be 70 degrees and the snow would evaporate (dry, high desert area). Of course, that was at 6,000 feet. In the mountains, you had 15 foot banks of snow along the roadside into July and August. We got caught in a blizzard in Rocky Mountain National Park in July. We drove down the mountain and it was a nice summer day in the 70's.

Heather--The draw in Iowa isn't the climate, that's for sure. Having grown up there, I can tell you the best thing about the state is the people. Sound like you found a good Iowa boy while you were there. Kudos!

Lise--Sounds like taking a personal day is a good idea! When I was in high school I sang in a national choir that performed at Carnegie Hall. While we were in NY, I got to stay with a terrific family in Levittown out on Long Island. Exploring NYC was a heady experience for an Iowa girl.

Doing it while there's a foot of snow is an honor I dream not of! I bet it's really crazy!

Janet--We hear from my folks in MO that you're having a colder winter this year with lots more snow than usual. Stay warm!

Pat--Snow is different from one part of the country to the other. In Park City, it's very low moisture powder (a lot like Colorado!). In New England, they call it "mashed potato snow." It's heavy and lumpy--perfect for snowballs, murder on snowblowers.

I don't get a chance to miss winter here in Boston, but I do miss mountains.