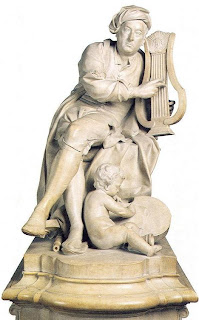 In my upcoming release, STROKE OF GENIUS, my heroine Grace Makepeace and her family visit the Vauxhall pleasure gardens. Grace's father is offended by the larger-than-life statue of the German composer Handel.

"Now wait a minute!" I hear you saying. "What's wrong with this fairly goofy looking depiction of a harpist?"

Handel is wearing his dressing gown and night cap. One stocking is off and his bare foot is tapping time on his discarded shoe. Why, the man might as well be naked! His outfit was fine for an intimate evening at home, but not in a public garden!

The point of the statue was to show the great composer as his family and closest friends might have seen him. Handel was from the 18th century, but Regency men (early 19th century) still wore dressing gowns called 'banyans.' They were inspired by kimonos and were often quite ornate and beautiful.

Last week I posted about Regency men's outer fashions--Hunks in History and The Joy of Being Properly Tied Up. If you're like me, you'll want to know the rest of the story. What did they wear under their tailed jacket and skin-tight trousers? 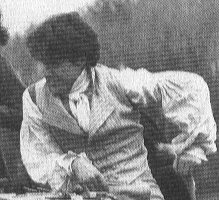 The primary undergarment was always the shirt. The fellow at right might be said to be in a state of undress because his underwear is showing. A gentleman never appeared before a lady without his jacket unless he was the lady's husband.

So why was a shirt considered underwear?

Because it might well be all that was between the gentleman and his trousers. The shirt tails were very long and could be tucked over and under like a diaper. Beau Brummell, the menswear guru for the Prince Regent, sometimes didn't wear drawers if he felt they would spoil the line of his trousers.

But if a man did elect to wear drawers, they'd look something like this with a laced up waist and drawstrings at the knees. Kind of easy to understand why "going commando" was appealing.

Stockings of wool or cotton completed a man's underthings. For formal occasions when knee britches were still de rigueur, he might wear cotton stockings beneath his silk ones to minimize the appearance of leg hair.

So now, the next time you watch Sense and Sensibility or Pride and Prejudice and see a fine gentleman done up in the height of fashion, will this question run through your mind?

Drawers or commando?
Posted by EmilyBryan at 7:52 AM

I just think there is something sexy about a man in a jacket. From the Regency era to today's modern times. All the ladies want the half naked, bare chested hunks. Give me a guy in a dark suit and hat anyday, I will melt! LOL!

Oh, yes! I wish hats would come back for men. My DH has a Stetson, and Indiana Jones type hat he wears when it rains. Love it.

Great post. I can't imagine wearing the underwear of the past. I can see why the men and women would have opted for commando.

The women of the Regency had things pretty easy in the underwear department. Unlike their mothers during the Georgian period or their daughters of the Victorian age, they were not subjected to stiff boning to corral their bosoms. The style called for a very natural and classical line.

For underthings, they wore open-crotched (no, that idea did not originate with Mr. Fredrick's of Hollywood!) pantalets in fleshtones that gave the appearance of nakedness beneath their watered silk empire gowns.

Oh, I like jackets on men, too. My guy wore a "bomber" jacket back in his Air Force days, and it was soooo sexy. Then he went Western- Stetson, fitted shirt, bolo tie, Levis, and Tony Lamas.

Well, what can I say, we are both Westerners at heart.

Those guys of yore who wore those skin tight pants needed to have super good legs for me to pay attention. And I can never stop my mind from wandering to, a trip to the loo must have been interesting.

Interesting post. Undergarments aren't usually high on anyone's list when reading a book. As a writer it is important, especially when characters are dressing and undressing. We visited a civi war era house in Texas. In the master bedroom, they had the lady's outfit laid out for the day. Many more pieces and layers than I'd want to have to contend with!
Drawers or commando, looking at the options, who'd want to wear them?

Joyce--Boots are great, cowboy or otherwise!

Pat--I guess you could class this information as stuff a writer needs to know about her characters even if no one else does.

What interests me is the attitude people had about themselves and how they presented themselves to the world. Imagine being offended by a man in shirtsleeves!

Great post, Emily.
I learn so much from reading them.
I'm going to assume the hero goes commando. The undies ruin it for me. :-)

It depends on how his trousers fit. Crispin Hawke, my hero in STROKE OF GENIUS, is enough of a peacock to let fashion dictate whether or not he wears drawers. (If it's good enough for Brummell, it's good enough for Crispin . . . barely. In case you couldn't tell, he thinks pretty highly of himself. A common failing of geniuses.)

You ALWAYS come up with the best subjects for your blogs. I really enjoyed this one... I cannot imagine my husband bound up on those underpants. I'd say all men probably would go commando these days.

I think you may be right, Paisley. But remember modern men have the hazard of zippers to contend with--something with didn't plague Regency males. Zippers weren't invented till @1913 or so.

I'd think men would wear drawers if they were riding -- you know, to give an added layer of protection against, ahem, chafing. But who knows? The shirt tucking in thing goes along with what I've heard elsewhere and does make sense. What I wouldn't give for a time machine! Although, then I'd have to come up with a sneaky way of learning the truth...that could be fun!

I suspect riding would be a good time to wear a little extra protection and if the gentleman was wearing buckskins, the line of his pants would not be disturbed.

Excellent post Emily, so entertaining! Oh, how I wish my hubby would dress in period clothing, at least just once!!! lol

Honestly, I came here to learn about blog writing as I am planning on starting my own blog and trust me I have learned a lot from this beautifully written article. Nice job, Emily.