Things I Wish I'd Known Before I Was Published . . . 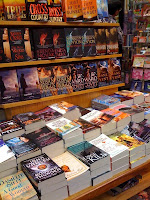 Everything about the publishing biz has a steep learning curve, from mastering the writer's craft (a never-ending proposition) to the "dollars-and-sense" decisions that shape an author's career.

Just to give you a little background, I've had titles on the shelves since May 2006 but I got "the call" in May 2005. I'd been scribbling away furiously for 4 years prior to that. As of May 25th of this year when STROKE OF GENIUS comes out, I'll have 8 books to my credit, with multiple foreign sales of all my titles. I'm the first to admit I've been incredibly blessed.

But if I could have had a "fairy godmother" to come alongside me and whisper wisdom in my ear right after "the call"--or better yet, before it--my journey through Published Land might have been smoother.

So if you're a pre-published writer, let me strap on my wings and be your fairy godmother for a moment today as I share . . . things I wish I'd known before I was published.

1. Make friends with the internet. Before I got the call, I barely had an email address. All of a sudden, I was expected to have a website, a blog, a presence on the social networking sites . . . Fortunately, my kids were able to walk me through setting up a MySpace and my DH (AKA The Computer Whisperer) figured out a way for me to have a website I could update and maintain on my own. After many incarnations, I'm finally happy with its appearance and functionality. In hindsight, I probably should have had the website professionally designed. But I'm the thrifty sort and I like being able to change the content whenever I want.

Why do I need to be online in such a big way? I hear you asking. Because of Number 2.

2. Build a platform. This is about developing a pool of people who are interested in your work and will be excited enough about it that once you sell, they'll run out and buy your book on the day of its release. (Incidentally, I didn't realize before I sold that the NYTimes list is not a function of the number of books actually sold. It's a measure of the velocity at which they fly out the bookstore doors during the first week of release.)

So an author needs to network (I know, I know. Most of us who spend our days huddled over a computer do so because we're basically shy, but this is the time to punch out of our comfort zone.) Join writers' groups. Attend conferences. Talk to your bridge club about your writing. Offer to speak at the library. Do everything you can to spur sales on that first critical week of your release.

Your fairy godmother wishes she could sugar-coat this, but then she'd be lying to you. And that's not nice. We like to think it's all about our lyrical prose, but publishing is a business. We live or die by the numbers.

3. Your first agent/editor may not be your last agent/editor. Publishing may move at glacial speed most of the time, but there is a constant--Change. Once you step into Published Land, you'll discover it's really a very small world indeed and the deck chairs are rearranged with regularity. Editors change houses and authors are orphaned. This has not yet happened to me. I've been blessed to have Leah Hultenschmidt as my editor for all my work. But plenty of my friends have been shuffled or cut off when their editors' careers take a turn. If/when it happens to me, I promise not to be surprised.

But if I've been blessed in the editor department, I've had some odd turns in the agency realm. I've only been published since 2006, but I'm on my 3rd agent. Lest you think I'm the demanding client from hell, let me assure you this is not so. A couple weeks after I got "the call," I got another call from my agent and her jr. agent, who was the one who actually signed me. The jr. agent wanted to branch out and form her own agency. I had to decide if I would stay with the original firm or go with the person who offered me representation in the first place.

I should have been only excited about my sale and my career's upturn. Instead, I was thrust into an intra-agency squabble. And I made a business decision based on emotion and friendship, which led to a couple years of wrangling with both parties. What I should have done was decide to leave them both for putting me in the position of having to make that decision in the first place.

Now I have an agent who's established enough to focus on my career instead of hers. Live and learn.

4. Rejections still come, even once you're published. This is the last piece of advice, I promise. On the flight home from 2005 RWA Nationals in Reno, flushed with the excitement of meeting my editor and feeling like a real writer, I was seated next to a woman who'd written straight Regency romances for years. The market for those sweet stories had shrunk so, her publishing house was closing the line. She was out of a contract for the first time in 20 years.

Obviously not. But the world still has room for cozy mysteries. If she could reinvent herself as a mystery writer who set her stories in the Regency era she loved, couldn't she keep writing? Or what about inspirational romance? I asked. The woman could obviously write. Why not try another genre?

I don't know if she did. But the encounter taught me something.

A writer writes. She invents. Sometimes that means reinventing herself as well. When my editor told me I needed a new name because DISTRACTING THE DUCHESS was such a departure from my Diana Groe books, I didn't bat an eye. This is not an unusual situation. If every author who had multiple names turned purple tomorrow, there would be a lot of purple authors in the world.

NYTimes Bestseller (and my good buddy) Bobbi Smith gave me this advice when my debut book came out. "Stay published."

To do that, I had to learn to be flexible. Roll with the changes that come your way because they assuredly will come. But above all, enjoy the ride!

Now, I'll slip off my fairy godmother wings and go back to my WIP. As always, I welcome your comments and questions and if I don't know the answer, I promise to make something up.
Posted by EmilyBryan at 7:19 AM

Thanks Emily! I am on the right track so far! Mostly due to the fact wonderful authors like you and Judi McCoy and Bobbi Smith and countless of others who help us aspiring writers. THANK YOU!!

Ah, Emily. Great blog, as usual! Thanks so much for posting this. I needed a fairy godmother today.

I am over at Judi McCoys board for her newbies coming to RT for the beginners writing class! I told them to all come over and visit you today!

Jane--Thanks for sending the aspiring writers my way! I love working with Bobbi and Judi and all the "pre-pubbed potentials."

Rebecca--Let me sprinkle a little extra fairy dust on you today! Glad my post helped.

Emily -
You make a wonderful Fairy Godmother. I am a struggling new author just a bit down the track. I have learned just enough so far to appreciate the wisdom of the road ahead that you illuminate.

I take your advice to be: (i) keep your head down on the keyboard as the stories flow; (ii) open up your creative self to the world of social media to establish an audience that wants to hear your voice; (iii) appreciate agents and editors who are supportive, skilled and remain in their own saddles; and (iv) pay homage to your Fairy Godmother.

Finally, can we look forward to a future Emily Bryan tome entitled "The Fairy Godmother"?

Hi Emily this is a wonderful post with so much good info. I'm going to bookmark this and reread as I go along. Maybe just maybe one day I'll actually finish one of my many started stories and try to get published. You are so sweet to be offering such great advice to everyone. I thank you sincerely. :)

Thanks for this post. I need this reality check sometimes to remind the agent hunt is only the *start* of the game.

I doubt there will be a title about fairy godmothers in my future, but I think I've figured out my costume for the RT Fairy Ball!

JennJ--You mean you haven't finished a manuscript yet? For shame!

I'm kidding. When you've got a story you're compelled to tell, you'll finish it.

But if your goal is to be published (and I don't mean "gee wouldn't it be nice." I mean a gotta-have goal) then you need to be stern with yourself. Ask why you haven't finished any of the stories you started. If it's just lack of BICHOK (Butt in chair, hands on keyboard), then you know what you have to do.

Crista--You've got it right. Publishing is a marathon, not a sprint. Good thing, cuz I'm built for stability in high winds!

Chelly--It's a little like the Wizard of Oz. When you pull back the author's curtain, there's a pretty ordinary person from Kansas (or wherever) looking back at you.

People have been coming into this world with the same wants and needs since Eden. Writers just set them down on paper for others to read and say, "Yeah, I've felt like that." We read to know we aren't alone. I think we write for the same reason.