A Gift to the World 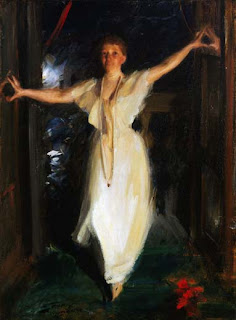 On Thursday, after taking the red-eye back from Seattle where I spoke for Eastside RWA, I went to the Isabella Gardner Museum. A friend of mine is a docent there and she treated a small circle of us to a private tour.

Isabella Stewart Gardner was the wife of a wealthy Boston Brahmin who inherited 1.6 million upon the death of her father in 1891, back when that was an embarrassingly large sum. She and her husband agreed she'd spend the lot acquiring art. So she spent her life and her funds traveling the globe cherry-picking masterpieces.

I was already so sick with envy, I was predisposed not to like Ms. Gardner a bit.

Then I saw what she'd created.

The Gardner Museum is an absolute gem! More than merely a collection of acknowledged masterworks, this is the sum of a life's passion, a peek into a woman's soul. It's a very personal exposee of a unique individual's quest to educate, to tempt, to infuse her culture with an appreciation for beauty. Not only did she acquire art, she encouraged and supported the best artists of her time. Then she put on her curator hat and transformed her home into a museum (She lived on the fourth floor of this incredible building that's wrapped around a four-storey Venetian-style courtyard). By observing what she'd so carefully chosen and so lovingly displayed, I learned about her tastes, her loves, her theology, and her eccentricities.

The museum was the site of a major heist ten years ago. Someone broke in with a "shopping list" and sliced a Ver Meer and several Rembrandts from their frames. Since the paintings haven't resurfaced, we can only assume they are in the private collection of some cash-rich, spirit-poor meany-head who doesn't work and play well with others. I wonder at the smallness of heart that would steal beauty from the world so they alone can enjoy it. But I suspect owning those pieces gives them little real pleasure because they can't let anyone know they have them. The frames still hang empty in the Gardner Museum to this day.

The painting above is a portrait of Isabella Gardner done by Anders Zorn, a Swedish artist. I think it beautifully captures her generosity of spirit. She's stretched out, filling the space and pressing against the walls, refusing to be confined by the conventions of her day.

I like Isabella Gardner very much indeed.
Posted by EmilyBryan at 1:00 PM

Emily, this is a very interesting story! Dare I hope it'll be the backdrop to your next best seller? (grins)

All I know is my next heroine needs a liberal dose of Isabella's spunk! She traveled all over the world and we're not just talking Europe. In the 1890's she went to China and snapped photos of the Great Wall for her scrap books.

Her husband died before the building that houses her collection was finished, but he encouraged her work.

She wrote to a friend that they'd laugh to hear that she hadn't had a new dress in over a year because she was spending every cent she could in creating her museum. (She even cut up one of her gowns and used the fabric on the walls to highlight the area beneath Titian's RAPE OF EUROPA.)

She hated the impersonal art institutions of her day and wanted to showcase the works she'd collected in a setting as beautiful as they were. It's as if the entire structure is a single work, a collage of sorts.

I can't wait to go back!

what a wonderful museum! I definitely want to go there next time I go to Boston. Even without the Rembrandts and Vermeers! their paintings, especially Vermeer's, always make me happy because they're so beautiful, they work miracles with light, and make me proud to be Dutch. And it's such a miracle to be in the same room as something someone made 400 years ago, and to see what they see! It's so horrible when someone comes in and cuts it up - *and* takes it away from people!

Isabella sounds like a great person - she reminds me a bit of Artemisia the duchess, really :)

I remember the robbery and I always wondered if the paintings whould ever surface again.

Nynke--The Dutch have blessed us with lots of terrific artists! There is still one Rembrandt at the Gardner. It's one of his early self-portraits and fortunately it was painted on wood instead of canvas. The thieves couldn't slash it from the frame.

Loretta--I hope they catch them some how. Of course, it's always wrong to take something that's not yours, but it seems worse when that something is so grand no one person should own it.

Thanks Emily,
I am flattered by your swift, accurate and lovely description of one of my heroines. I too would like to be more like Isabella. Sometimes I think the Gardner Museum is not visited because people don't grasp what an accomplishment it is in one woman's life, when women didn't have the freedom or will to do what she did. It is a window to her soul.
Thanks for the blog,
Carole

Thanks for sharing Isabella's biography with me, Carole. I started devouring it last night and read till my eyes fuzzed out.