In addition to insane traffic and a high cost of living, Boston boasts one of the best orchestras in the world. My DH took me to a BSO concert over the weekend and as I wallowed in the pure joy of sound, the negatives of big city living faded into insignificance.

I know classical music isn't for everyone, but it moves me. My imagination goes into overdrive when I hear violins. The symphony subscription was a Christmas gift from my DH. He knows me well. Three dates with my sweetie accompanied by world class music--it doesn't get any better. 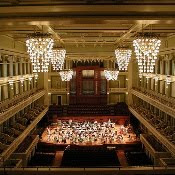 The Boston Symphony is conducted by Maestro James Levine and performs in beautiful Symphony Hall. You can't see them in this picture, but in each of the arched alcoves around the room there is a larger-than-life statue of a Greek god (anatomically correct, I might add!). Despite the ornate embellishments on the walls, the acoustics of the hall are fabulous.

The program was all Strauss and the highlight for me was the overture from Die Fledermaus. When I was a professional singer, I sang the role of Rosalinde, the heroine of this sparkling operetta.(Yeah, that's a pic of me in my Rosalinde costume. See why I empathize with my corseted heroines?) In Die Fledermaus, the heroine seduces her own wandering husband by posing as a Hungarian countess at a masked ball. It's a light-hearted froth and utterly delicious, both the story and the music. It was a treat for me to relive it a bit yesterday afternoon.

The rest of the program featured Don Quixote, a Richard Strauss tone poem, which was amazing. At one point they cranked up a wind machine to simulate Don Quixote's battle with a windmill. But the audience really got into the Johann and Jospeph Strauss waltzes. Just hearing that music brings hooped skirts floating around a glittering ballroom to mind.

And remember, when it first became popular, the Waltz was as scandalous as the Lombada. Here's a bit from the program about it:

"This fiend of German birth, destitute of grace, delicacy and propriety, a disgusting practice," spluttered one English writer of the 1830's about that diabolical instrument of immorality, The Waltz. Why, in this depraved display, he ranted, the couple actually danced in each other's arms, refusing to keep the respectable distance that characterized all the good old dances. . . . "a stronger narcotic than alcohol" arousing "passions bordering on mad fury." Alas for the poor Englishman, anything that delicious was bound to be a success!

The DH always stresses over what to get me for Christmas and Bdays, but he certainly chose well this time. I can't wait for the next concert!

What moves you?
Posted by EmilyBryan at 7:13 AM

Die Fledermaus sounds like fun! I'd never heard about the plot before, but now I want to go see it sometime :). Your concert does sound like the perfect gift; wonderful!
When I get moved by music, it's usually not classical but popular. It kan be any kind of genre, really , even house music: sometimes a tune is so hauntingly beautiful, I just get a lump in my throat.

I know exactly what you mean about the lump in the throat. I recently watched the Chinese pairs skaters in the Olympics doing a routine to Queen's "Who wants to live forever?" It was achingly beautiful, both the music and the skating.

One of my co-workers/friends is a violinist in our local city symphony. Last year she played for two symphonies. The smaller city symphony got a new conductor and he has brought such enthusiasm. (Personally, the larger regional symphony with the concert hall isn't nearly as good as the City). We have no real symphony hall. They perform in the chapel of a local college. The acoustics aren't too bad. The last concert was Feb.13 "From Russia With Love" guest soloist, Ella Chang, violin. The chapel has a pipe organ built into the walls, and the next concert will be "The French Finale" with Gregory Turay, tenor and David Runner, organ. As small as the chapel is, the large organ should shake the walls. I can't wait. We will be bringing our grandson (11).
My friend has gotten comp tickets for us for many of the concerts. This year they started an "Adopt A Musician" program, so we adopted her. The arts need the support.
We have lived in both big cities - Colorado Springs (what a wonderful symphony hall!), Sacramento, and Washington, DC. - and small. I appreciate what the big cities have to offer, but the pace of life and cost of living are drawbacks. We are close enough to get to Asheville, NC (great celtic concerts) and Knoxville, TN . We have been lucky enough to find great concerts when we travel. Were lucky enough to attend a concert at Tanglewood a couple of summers ago.
Just finished watching the ice dancing finals. The pair that danced to Phantom Of The Opera was wonderful.

Emily,
One of the concerts last year featured a Water Percussionist. Very different. Fascinating. I can't remember the name of the artist, but if you ever get a chance to attend a performance, go. My grandson still talks about it.

Oww, figure skating... the one thing I would watch the winter Olympics for, if all the skating weren't being done in the dead of night... Nasty time difference!

Pat--When we lived in Big Horn Wyoming, we were only a few miles from Sheridan and the WYO theatre. This little art deco gem had a lively concert season and regularly hosted chamber orchestras.

Sometimes, small towns can have the best of both worlds.

Nynke--I had the same trouble with the Olympics in Bejing. The time difference was so wide, nothing hit the window when I could watch.

I've now discovered a couple of video summaries of the ice dancing events online - tiny on screen, but still very beautiful! And the Russian pair's costumes are anthropologically very interesting :)