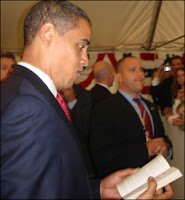 A couple weeks ago, I caught a story on NPR of professor Jack Murnighan's guilty secret passion for romance novels. He reads them furtively in his office when he should be preparing his next lecture on Beowulf.

Now the Huffington Post ran this pic of President Obama accepting a signed copy of Geri Krotow's A Rendevous to Remember. Geri signed it for Michelle and the First Lady made a point to come over to thank her personally. (Judging from the photo, Michelle may have a time wrangling it away from her husband.)

The HP goes on to suggest that literary circles will be dismayed that Michelle might be reading (insert horrified gasp!) genre fiction. First of all, Michelle Obama is entitled to read whatever she wants, just like the rest of us. And secondly, there is nothing inherently wrong with genre fiction. I tend to agree with Mark Twain on this matter. He said,

"A classic is something everyone wants to have read... but nobody wants to read!"

Don't get me wrong. I love the classics of literature. I didn't cheat, like my DH did, to pass my World Lit classes. (It was all about doing as little as possible with him. That bad boy always started at the back of the book and read forward till he had enough of the gist of the novel to write his paper! He managed a B without finishing a single tome! What do you expect from a Math major?) Even now, when I want my presuppositions challenged, when I want to think deeply about serious issues, I'll turn to a literary title.

But sometimes, I just want to be told a story. And there's nothing wrong with letting a well-told tale wash over you.

Living in New England, where only 12% of the population will admit to ever having read a romance novel, I feel a little vindicated by this story. Writing novels that will entertain and encourage people to feel happy is a worthy goal.

Can it be that in these uncertain times, folks in academia and the halls of power are finally realizing a guaranteed happy ending is a force for good? Why are they so surprised when people opt for feel-good fiction when their 401K is tanking and pink slips loom?

Why does the romance genre carry such a stigma with opinion-makers?
Posted by EmilyBryan at 8:10 AM

I still don't understand why the romance genre gets put down so often. A major percentage of the writers are highly educated and many of the books are well researched. The quality of the writing on the whole is very good.
At our library, I have started recommending female authors that write the type of books some of our male patrons usually read. Most that have tried them have been pleasantly surprised.
I listen to a lot of audio books and have been sharing them with my husband. At first I gave him the male authors only. Then I started sending him the female suspense writers and finally the romance books. He was pleasantly surprised. He did ask for a warning however, when he nearly drove off the road when a rather detailed love scene came on.
A good writer is a good writer, no matter what the genre. I think one reason romance books are not taken seriously by some are the covers. Clutch covers with partially dressed participants or the new trend of half naked men don't exactly give the impression of quality writing, strong characters and good plot development. Subtle is so much better.
Your comment about the low percentage of romance readers in New England didn't surprise me. When we travel, I am always going to book stores and thrift stores looking for books. In the South, there is an abundance of romance books. In the Northeast, I was surprised how few there were. Maybe it is because they are more pragmatic in New England.
Sorry I was so long winded. Have a good week.

Never apologize for a well thought out comment, Pat!

Not only are romance readers a highly educated bunch as a whole, I'm slightly intimidated by the education level of many of my fellow authors. Madeline Hunter and Eloisa James teach at the college level. Jessica Andersen is a geneticist by training. Jane Porter and Zoe Archer both have MFA's. Several romance stars, Julia Quinn and Lisa Kleypas to drop a few names, have ivy league educations.

Kind of makes my bachelor's degree from a state university seem a bit thin.

I think a lot of reason the romance genre gets put down is that it got stuck with the title "bodice rippers" and people just have not moved past that stigma. In speaking with several acquaintances, this is their opinion on romances, ALL romances. They don't seem to realize it's about the Romance of the story. They still see these books as they were written in the past and will not even give them a fair chance.
I agree with Patricia on the cover issue as well. These clutch covers perpetrate the stigma and keep it alive.

Terisa--I would love to see classy, artsy covers on my books, but unfortunately, the dollar is king. My editor tells me that clinch covers outsell the lovely, evocative type by a wide margin.

Please see my MAIDENSONG and ERINSONG covers (they are further down along the right edge of my blog)for perfect examples of beautiful, non-bodice ripping art. But if the market won't support this type of packaging, you sadly won't see much of it.

Oh! And I almost forgot the lovely cover for A CHRISTMAS BALL. It's like an ornament itself, all double embossed and gilded.

I hope the lack of a clinch won't hurt its sales.

Ha! I *love* that photo - what a great spokesperson for the genre President Obama would be!! :-)

We can use all the good publicity we can get (and I also caught that NPR story and absolutely loved it!).