Alpha Heroes and Why We Love Them

Politically correct? No way! Alphas don't give a dang what anyone thinks of them. They do what they want, say what they want, and, in the case of my pirate hero, take what they want. But if Alphas are such knuckle-dragging Neanderthals, why do we love them?

For one thing, they are frequently damaged in some way. Gregory House is wracked with constant pain. Jennifer Ashley's Ian MacKenzie suffers from Aspergers Syndrome centuries before it was diagnosed. Edward Cullen is undead and unhappy about it. In Loretta Chase's LORD OF SCOUNDRELS, her hero Dain was convinced as a child that he was a monster, unworthy of love. And as a man, he set out to prove them right. If you haven't read this terrific story, I urge you to run out and find a copy today! It's Beauty and the Beast writ large. 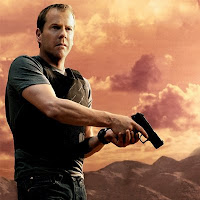 Alphas aren't limited to historical venues. My DH received the first season of 24 as a Father's Day gift and we sat down to watch it. (Warning: The series affects the nervous system like heroin. We had to finish the whole thing in just a couple of days!) The hero Jack Bauer is an uber-alpha. Smart, tough, overflowing with physical courage, he does what needs to be done, regardless of the personal consequences. He exhibits one of the most attractive qualities of an alpha--self-sacrifice.

But not all alphas are so high-minded. Bad boy heroes have captured our imagination since Bronte first created Heathcliff. There is an enduring feminine myth that any man, no matter how degenerate, can be brought to heel and reformed if the right woman sets out to reclaim him. While this makes for engaging fiction, I suspect actual cases of bad boys turning good can be counted on one hand.

So what about you? Do you like alpha heroes? Do they make you want to run the other direction? Who is your favorite Alpha?
Posted by EmilyBryan at 7:10 AM

I'm not wild about alphas, probably because so many of them live in Oklahoma. LOL! But there susare a few I can't live without. Several that Marilyn Pappano created live in my mind.
I think it's the idea that the right woman can tame a bad boy is what what makes me love them.
Susan
http://the-twisted-sisters.com
http://susanshay.net

I prefer a laid-back beta male any day of the week, Diana! But then, I was married to an Alpha and didn't care for it. (At. All.) LOL.

In fiction, I can enjoy them. I even envy them. I'd love to say whatever I want, be selfish, and get my way all the time. It doesn't work so well in partnerships, though.

Thank goodness I'm married to a wonderful Beta Male who lets me share the rights, respect and responsibilities.

Susan and Ashlyn--Great! Some nay-sayers right off the bat.

I would argue that part of the appeal of the alpha is hard-wired into us. We crave the strength of the packleader, the bountiful provider, the protector. We may be oh-so-civilized now, but there is something intrinsically attractive about the take-charge guy who gets things done.

Not all alphas are "bad boys." Eloisa James is working on one now who's a straight arrow, a leader in the House of Lords who's fighting alongside Wilberforce to end slavery. (Of course, he also has a heart condition and faints from time to time, but he has moral courage and that makes him an Alpha in my book!)

I love alphas! I love betas! I love them all! Emily, you mentioned 2 of my favorites...Ian and Dain! Also, the Carpathian vampires from Christine Feehan's Dark Series are the ultimate alpha males...totally domineering and very romantic. I think the best beta heroes have a little bit of alpha, too- that's what makes them so appealing. Really, being self-confident and self-assured is an appealing trait in both men and women. And sexy! What I don't like is a wishy-washy heroine paired with an alpha male...the alpha hero needs a strong sassy female counterpart, and then the sparks will fly!

Hmmm... I am all about the Alpha male, but not in the bad boy way. For some reason they seem to ooze confidence and control, more protective I think, is how I would describe it, but yes I love them! I often laugh because my husband has a total Alpha personality with a soft side, but I find it very sexy! I love that he protects and treats me like his princess!

Penelope--I think I'll blog about Betas next Monday, so be sure to pop back then!

Jane L--You've hit on an important element of an Alpha--that soft, furry underbelly. We want our men tough. We also want them vulnerable (but only to US!)

I love alphas - and don't mind bad boys. They make some of the best heroes if they've gone bad for a while out of torment and then reform by learning to love themselves. Sigh... Because, I agree, alpha heroes need to be vulnerable. I don't mind if they open up to their best friends and family members as well as to the woman they love, though. And that goes for men in real life, too, as far as I'm concerned :).

I wonder what to think about beta heroes; what would they be like? I guess a dependable and sweet man who just does what he needs to do would qualify... But then, he can only be a hero if he accesses the alpha male in himself, right? He needs to come out and confront trouble or claim the one he loves, or there can't be a romance-worthy plot, IMO. I'm curious what your thoughts are on this!

Nynke, I'm still trying to decide what I think about Betas.

I really love alphas. They are just rippling with masculinity, and not just physically. All that it means to be male--to be both smart and physically courageous, to take a stand and not waiver in the face of pressure. Yes, they can be stubborn and over-sexed, but that's just part of their charm!

I love them and hate them LOL. I like apha males who are up against strong determined heroins, the type of woman they just can't beat!

No particular alpha hero that I can think of this late at night.
the Beauty and the Beast scenario is my favorite , so I guess the damaged misunderstood type is my type.

Alaine--I agree with you. The heroine has to be someone who is the hero's match (though I've never understood true alpha females, being rather beta-ish myself. My version of a kickbutt heroine would be pretty soppy!) I don't think a man has to be unpleasant all the time to be named an alpha--just when he feels strongly about something.

Patricia--Beauty and the Beast is such an enduring story type because we want to believe in the transforming power of love!